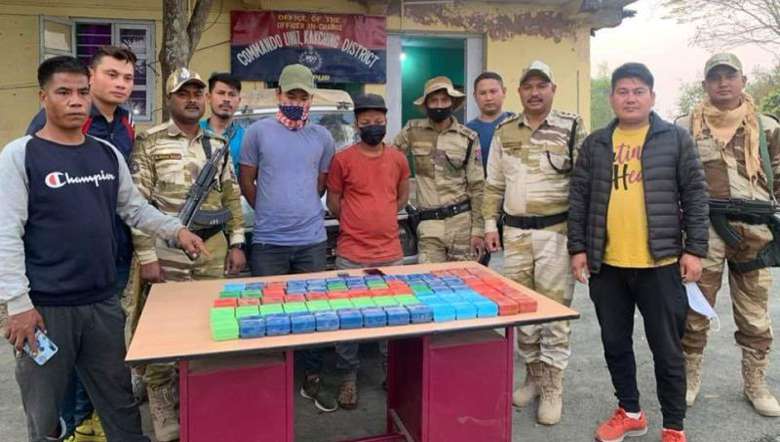 On receiving information on Wednesday that some miscreants were smuggling drugs to Sora village from Pallel through Koijam Village at Langthabal Khunou, the team of police personnel rushed towards Langthabal Khunou and carried out frisking and checking operations, a release stated.

It stated that while conducting frisking and checking, the CDO team noticed one Gypsy white in colour without any registration number coming from Koijam Village and proceeding towards Langthabal Khunou side.

The vehicle was given a signal to stop for checking, but the said Gypsy, tried to speed away and escape from the checking point, it stated. However; the CDO team was able to stop the Gypsy and detained the driver of the said vehicle at Langthabal Khunou near Public Hand pump, by maintaining SOPs of COVID-19 for verification, it added.

It stated that when the Gypsy was thoroughly searched, sixty nine Soap cases containing contraband items suspected to be Heroin No.4 which were kept concealed in the Running Board of the vehicle were discovered.

The 69 soap cases were recovered from the possession of Satminlun Kipgen, it stated.

The release also mentioned that upon weighing the detected drugs suspected to be Heroin No.4, it was found to be approximately 833 grams in total including the weight of the transparent polythene.

The contraband items, one Gypsy white in colour without registration no. bearing chassis no. MA5EGF41S00256728*DB & Engine no G13BBN368433 and one OPPO Mobile were seized at 9:20 pm from the spot and hence, he was arrested at 9:30pm, by observing all the necessary legal formalities.

Further, the Samsung Mobile (Samsung Mobile Model no SM-B351E) was seized from Seikholen Haokip at 9:35pm, and he was also arrested from the spot at 9:40 pm, by observing all the necessary legal formalities.

On questioning about the suspected Heroin No.4, Satminlun Kipgen disclosed that he had brought those suspected Heroin No.4 at the direction of Len Haokip of Saivom Village, Tengnoupal, and it was to be handed over to one person at Sora, whose particulars were not mentioned by Satminlun Kipgen, the release continued. Hence, the arrested persons along with the seized articles were handed over to Khongjom PS for further necessary legal actions, it added.