The people and organisations have sought for peace and appealed for humanitarian access to support the vulnerable civilians in Myanmar. 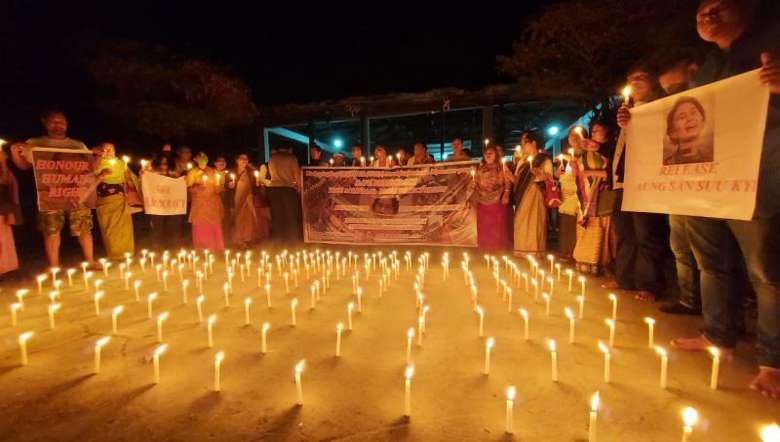 Showing solidarity with the people of Myanmar and against the military coup that curtailed democracy, various organisations and people from different walks of life lit candles in front of Ema Khunthokhanbi Shanglen, Thangmeiband, Imphal West at 5:30 pm on Thursday.

The organisations that took part in the observance of candlelight to pay tributes to those killed in anti-coup protests in Myanmar included International Salai Cultural Foundation, Kangla Famthou-64, Salai Taret Punshi-Luptil, Hampak Lai-Kal, Salai Mapari Chingpul-Lup and others.

The people and organisations have sought for peace and appealed for humanitarian access to support the vulnerable civilians in Myanmar.

IFP correspondent from Ukhrul added that Tangkhul Shanao Long (TSL), an apex body of Tangkhul Women's League, held a special prayer programme on Thursday at its office in Wino Bazaar, Ukhrul, for the victims and people of Myanmar who are currently facing the military junta wrath.

Under the themes ‘We are with you brothers and sisters in Myanmar’ and ‘Restore Democracy in Myanmar’, the mournful prayers marked the gathering with the hope that God's healing and mercy touched the hearts of the military junta leadership. It also strongly voiced their united protest against the ongoing military crackdowns on the anti-coup protesters.

The programme was organised in the light of the nationwide movement against Myanmar's military oppression as the unarmed civilians continued to mount pressure pushing for restoration of democracy in the country. More than one hundred women turned up in 'Kathi Kashan', a traditional Tangkhul wrap-around skirt which is worn as a sign of mourning.

TSL president, Zingkhai Veronica said that God can change the will and mindset of junta's leadership who are torturing and killing the peaceful protesters, adding that as Christians, we believe God can prevail upon the leaders. She also informed that towards providing goodwill assistance to those affected by the military crackdowns, the Tangkhul Women League has collected Rs 69,000 as offering from among its members and well-wishers from different localities of the town.

Speaking at the solidarity prayer meet, president of Tangkhul Katamnao Long (TKS), Shimri Raising said that "We strongly condemn the inhuman excesses perpetrated by the brutal militarisation and join the global community as we mourn the mounting casualties suffered by the innocent civilians.”

He lamented that as many as 149 precious lives including women and children have fallen prey under the barrel of Junta's aggression.

While seeking the United Nations to intervene, the student leader had urged the world's most powerful think tank council bodies to intervene and stand up for the struggling people of Myanmar so that peace is maintained with restoration of democracy in the country.

During the programme, people held different placards reading ‘UN and India must intervene’, ‘Bloodshed is not the solution’, ‘Junta and Tyranny’, ‘Restore democracy in Myanmar’ and others.