Sanaton Athokpam, the medical student of RIMS who was found dead inside his hostel room on 15 March. 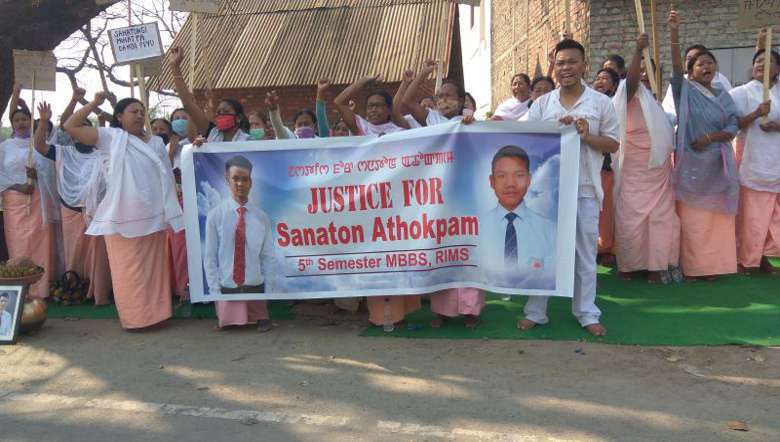 Speaking on the sidelines of the event, the sister of the deceased, Sanathoi Athokpam urged the authorities concerned and the state government to book the culprits involved in the incident.

She said the autopsy was conducted at JNIMS morgue on Tuesday but the authority told the family members that the result will come after a week. She urged to provide the autopsy result immediately in order to deliver justice for Sanaton.

Representatives of ‘Justice for Sanaton Athokpam’ met Chief Minister N Biren on Wednesday but a response from the chief minister is yet to be received, she added.

However, Chief Minister N Biren Singh posted on Facebook that he “met the family and relatives of Sanaton Athokpam, the medical student of RIMS who was found dead inside his hostel room on 15 March. I share the pain of the bereaved family and promise to make a speedy investigation on the sad incident.”

During the sit-in-protest protest, placards that read “punish the murderers of Sanaton”, “we want justice for Sanaton” and others were displayed.

A condolence meeting over the demise of late Sanaton Athokpam was also conducted at Jubilee hall, RIMS on Tuesday.