Time for other religious faiths also

IFP Editorial: Being a BJP chief minister, N Biren Singh might have his compulsions. Yet, he must realise that the particular brand of Hinduism being followed and practiced in Manipur is much too different from that of North India. 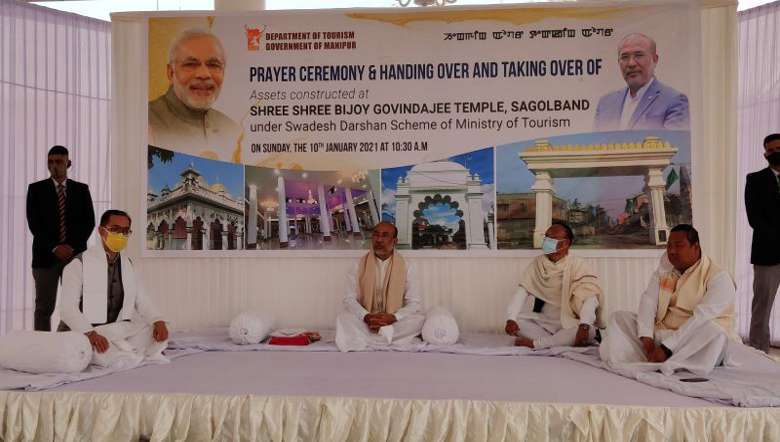 When the state Chief Minister N Biren Singh recently handed over newly constructed assets at Shri Bijoy Govindajee Temple at Sagolband under Swadesh Darshan Scheme of Ministry of Tourism to the temple committee, we had drawn his attention to the necessity of putting equal importance to other faiths also other than the Hinduism. The Central government had taken up the Swadesh Darshan Scheme which aims to promote and harness the potential of tourism of our country. Earlier in December last year, a new spiritual tourism circuit in Manipur was inaugurated. The spiritual circuit has been created around the Mahabali Temple, one of the famous temples in Imphal. Manipur’s spiritual circuit was created as part of the Swadesh Darshan scheme. The scheme was launched by the Union Ministry of Tourism. The Swadesh Darshan scheme seeks to develop various thematic circuits in India to boost its tourism industry. The new spiritual circuit will let tourists take a pilgrimage tour in Manipur of the famous temples. It will comprise of Shri Govindajee Temple, Shri Bijoy Govindajee Temple, Shri Gopinath Temple, Shri Bangshibodon Temple and Kaina Temple.

Well, the initiative of the government is widely appreciated among the followers of Hindu Vaishnavism in the state, which is a majority group in the valley. Yet, questions have been raised about the development of religious sites of the non-Hindu people and other indigenous religions in the state. It has been widely agreed that the King has no religion. He may follow a particular religion of his own, but in a state with diverse faiths the King or the ruler should not be seen encouraging a religion of his choice. The present Rajya Sabha MP Maharaj Leishemba Sanajaoba follows the indigenous faith, but he respects all other religions. Likewise, the present Chief Minister N Biren Singh was once an avid follower of the indigenous faith. But, his responsibilities as a chief minister required him to be above religion. Being a BJP chief minister, he might have his compulsions. Yet, he must realise that the particular brand of Hinduism being followed and practiced here is much too different from that of North India. The ancient culture and value system of the Meiteis are deeply rooted in the Hindu Vaishnavism which is practised here. Pluralism is inherent in the Meitei society and it is evident in its culture and religious practices.

Anyone who tries to negate this pluralistic tradition and culture would be at peril. One has no objection to the spiritual circuit based on Hinduism. But, the sites of other religious faiths have to find a place in the Swadesh Darshan Scheme also. For example, the most important site of Manipur which is Kangla in the heart of Imphal is the most neglected site. For the indigenous Meitei faith, there are several sacred sites all over the state including the sacred Koubru and Thangjing. Likewise, Christianity has become a major faith in the state. Reverend William Pettigrew was the first foreign missionary to arrive in Manipur on 6 February 1894. After six months of working among the Meitei people, he was not allowed to continue his work in the valley. This happened when the then Political Agent Major Maxwell returned from furlough. As he found the Hindu Meiteis were alarmed by Pettigrew’s work, he immediately ordered the missionary to stop working and leave Imphal. Having wandered through some of the neighbouring villages, he finally came back to Ukhrul and decided that it was most suitable place for his missionary work. In 1901, the two communities of the Kukis and the Nagas were the first to have receive Christianity. Today, most of the hill tribes besides many from the Meitei community have converted to Christianity. Our contention is, the state government should also propose religious circuits for other faiths in keeping with the diversity in the state. For Christians, the historical sites of its spread in the state needs to be highlighted in a proposed circuit. It will go a long way in fostering both communal and religious harmony.

The King has no religion