How four years of 'citizen-centric governance' was celebrated across Manipur

The district administrations of Imphal, East-West Thoubal, Senapati, Ukhrul, Tamenglong, Churachandpur, Tengnoupal and Tamenglong joined the celebration in a grand manner. The celebration programme was telecast live in Imphal. 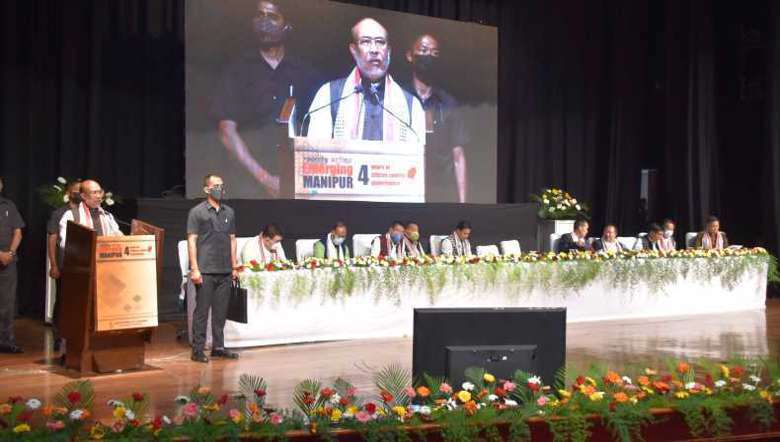 Four years of citizen-centric governance was celebrated across Manipur in several districts by holding various functions and video conferences on Monday. The district administrations of Imphal East-West, Thoubal, Senapati, Ukhrul, Tamenglong, Churachandpur, Tengnoupal and Tamenglong joined the celebration in a grand manner. The celebration programme was telecast live in Imphal.

In Kangpokpi - the district administration held the celebration via video conference at Multipurpose Hall, DC office Kangpokpi. It was attended by DC Kangpokpi, Somorjit Salam, SP Kangpokpi PG Singsit, additional DC Kangpokpi Lalramsang Intimate, additional SPs, SDOs, SDC, and other district level officers of the district. decoration lights were put up along the National Highway in Kangpokpi town and DC office Kangpokpi was also beautifully decorated apart from putting up various gates and other activities, including sanitation drive and tree plantation.

In Churachandpur - the district administration organised a programme at Peace Ground Auditorium, Tuibong. DC of Churachandpur, Pawan Yadav attended the programme as the chief guest while SP, Amrita Sinha and DFO  Esther L Serto were the functional president and guest of honour respectively. CO of 1st IRB, Lunkhomang Khongsai and DLOs of Churachandpur also attended the occasion as special guests along with students and members of the general public. As a part of the programme solar lamps were distributed to students of 10 schools in the district Headquarters and 10 schools from the sub division. Addl DC-II, Khaikhopau Ngaihte conveyed his thanks to all for participating in the programme and the state government for distributing CMHT /PMJAY health cards to the people, claiming that a total of 2,148 beneficiaries from the district had been getting free medication to the tune of Rs 2 crore.

In Tamenglong -  The celebration programme was held at Mini Secretariat conference hall at Farmland Tamenglong District. DC Tamenglong, Armstrong Pame said, “At least 10 km of Tamenglong-Khongsang road is set to be blacktopped before the rainy season. Construction has been going in good progress... No children have to walk on muddy waters again while going to school... Tamenglong district will have the best ground in the hill districts of Manipur. The CM of Manipur will be coming in April to inaugurate the ground”. He spoke on the six mega projects and various developmental projects which were taken up in Tamenglong district over four years. He thanked the citizens of Tamenglong for being so cooperative with the government in developing the district, and also made a public appeal in beautifying the Tamenglong ground.

In Senapati - the district administration said in a release said that the programme was telecasted live to the public at the Multi-Purpose Hall, DC Complex, Senapati. Speaking on the occasion, DC Senapati, Th Kiran Kumar said, “The uniqueness of the present government can be seen clearly with the closeness of the public and government where earlier it was impossible.” He implored the people for more co-operations in further activities, it said while mentioning that the DC also attended the release of balloons on the 4-years achievement celebration which was held at Jamning Valley, Senapati.
The 4-year celebration on the achievement of the government of Manipur began on Wednesday March 10 with various activities which included Tree plantation drive, awareness programme on village health and nutrition, Covid appropriate behaviour and action, war against drugs and workshops on Rozgar Diwas/skiing and employment amongst others, he added.

During the programme, 10 solar study lamps were distributed to students from various colleges and schools, it continued while also mentioning that the Senapati district Administration in collaboration with SDSA and Royal Brothers organised a bike rally which was flagged off by SP, Senapati M Pradip Singh from Karong Bus Parking. The latter part of the celebration included a musical extravaganza session with various music artists from Imphal and release of balloons. DLOs, members of various CVOs, and students from different schools and colleges took part in the programme, it added.

In Thoubal - the district administration held the celebration at the Counting Hall, DC office Thoubal. A release stated that while adhyaksha GP, Hasina Begum attended the function as chief guest, DC, Thoubal, N Bandana and SP Thoubal, S Ibomcha were the president and guest of honour respectively. Speaking on the occasion, N Bandana stated that under the leadership of CMN. Biren Singh, various development activities have been taken up in the District.” She also urged the elected members to help the people in getting PMJAY and CMHT cards, it said.

A 2-day mela showcasing the various activities and achievements of the state government was also organised at the Mini Secretariat Complex, Thoubal. About 30 stalls of different departments were opened which both the DC and SP inspected. As a part of the occasion, a short film “MangkhinuThouna” produced by District Child Protection Unit, Thoubal was released earlier by the chief guest, and a street play “Nupithiba Kijei” based on NashaMukt Bharat was also demonstrated, it added.