Without efforts and cooperation from communities, the government alone cannot save the Nambul river, deputy director, directorate of Environment and Climate Change T Brajakumar said. 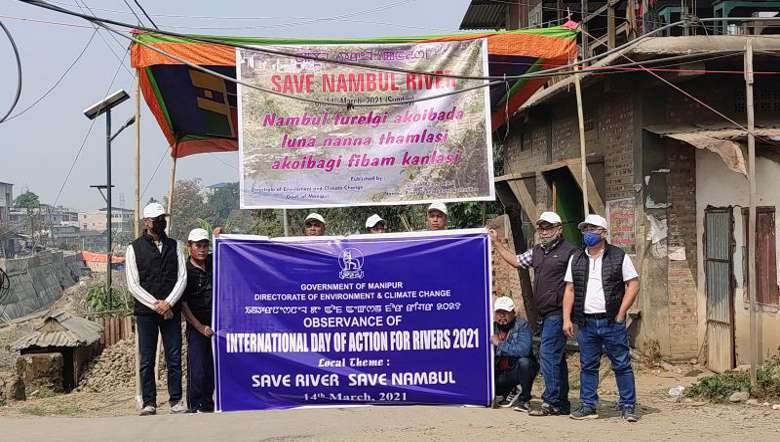 With an objective to save Nambul River, Directorate of Environment and Climate Change, observed International Day of Action for Rivers, 2021 under the theme ‘Save River Save Nambul’ on Sunday.

Speaking to the media on the sidelines of the observance ceremony, deputy director, directorate of Environment and Climate Change T Brajakumar said that rivers are very important for the existence of life on the earth. For this reason, the people first began to settle near rivers when human civilizations started. But over the past many years, people have been destroying rivers and taken them for granted instead of saving them.

He further said that the flow of water has been reducing drastically due to deforestation in hill areas. The meager amount of water flowing in the valley areas is again polluted by dumping effluent and garbage. This has caused rivers to exist in deplorable conditions.

Concerning Nambul River, he said that the river starts flowing through the heart of Imphal city from Iroishemba area and finally falls into Loktak Lake. Many populations of the state settling around the river used to depend on this river for almost everything. But nowadays, the water from the river cannot be even used for domestic purposes.

“We cannot survive without life and hence, it is high time each one of us extends voluntary support to save the Nambul River successfully. Without efforts and cooperation from communities, the government alone cannot save this river,” he said while appealing to the people to stop doing any activities that will lead to pollution of the river.

Corporator of Ward No XXVII of Imphal Municipal Corporation Herojit Ngangomba said that one of the major reasons behind pollution of Nambul River is dumping of waste materials at its banks. The people should change their mindset of disposing of such garbage at the river side and start accessing door-to-door waste collection systems.

The waste collection system is being provided at nominal rates, he further said while adding, “It is time we realise that the benefits of saving Nambul River will reach each and every section of society and even the future generations. With this belief, let us stop reckless disposal of garbage along the river.”

He further said that the installation of ‘river front gardens’ from Keishampat to Keishamthong Bridge helps in enhancing the condition of the river as people hesitate to throw garbage in such beautifully developed sites. Therefore, replicating this model in various places along the Nambul River would be helpful in saving Nambul River, he said.

All Manipur Working Journalists’ Union (AMWJU) also observed International Day of Rivers-2021 on Sunday by conducting a media campaign. The programme was organised under the sponsorship of directorate of Environment and Climate Change.