The Manipur PHED minister said that even though awareness to educate people on the preservation and conservation of water has been taken up, it takes time to make the people understand the importance of harvesting water. 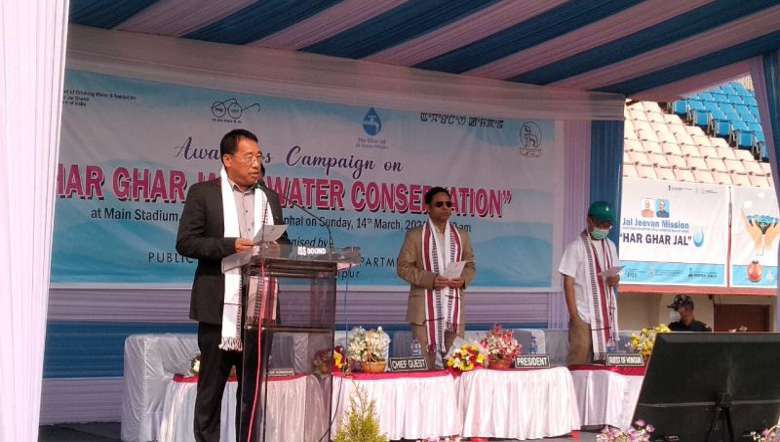 Manipur PHED Minister Losii Dikho on Sunday appealed to youth to spread the message of conservation and preservation of water as the youths have the potential to make greater impacts upon the people.

He was speaking on an awareness campaign of ‘Har Ghar Jal and Water conservation’ held at the main stadium of Khuman Lampak on Sunday. The awareness campaign was organised as a part of the ongoing four years celebration by the state government by the Public Health Engineering Department, government of Manipur.

The minister said the campaign is being organised as a part of Jal Jivan Mission (JJM) envisioned to provide safe and adequate drinking water through individual household tap connection by 2024 to all households in rural India.

He said Manipur is a beautiful state blessed with lots of natural resources. The state needs young and committed people to actively take part in the developmental process of the state, he said. Water has become an important commodity since it is one of the fundamental things necessary for survival, he added.

Even though awareness to educate people on the preservation and conservation of water has been taken up, it takes time to make the people understand the importance of harvesting water, he said.

By 2022, the government with the active participation of the chief minister will connect every household with safe potable water, the minister said. He encouraged the youths to take part in messaging people for conserving and preserving water with dedication and commitment.

PHED commissioner Devesh Deval said the department aims to achieve the target within the next year. Water is a natural resource and should not be taken for granted, he said adding each and every citizen has the capacity to come together towards the preservation and conservation of natural resources. The programs are being organised at the district level and village level mobilizing the public to create awareness among the people, Devesh added.

During the campaign, the minister released the IEC campaign of JJM carrying the message of the importance of conservation and preservation of water among the masses, he added.