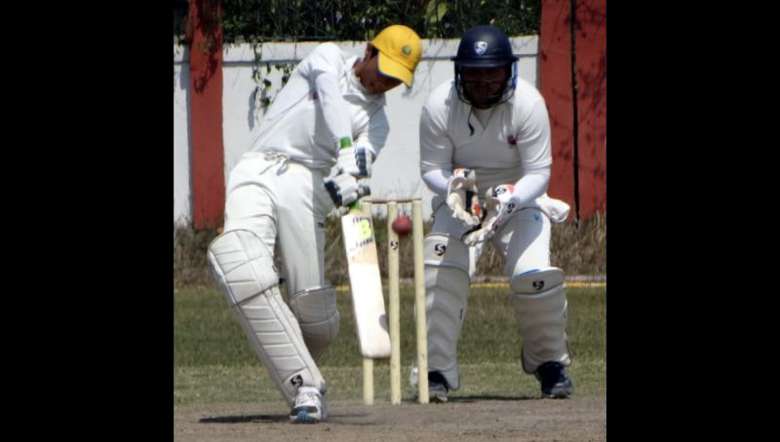 A batsman making a defensive stance during the relegation match between YWC Langthabal and THAU Thangmeiband (PHOTO: IFP)

Electing to bat first after winning the toss, YWC Langthabal rode on skipper Prakashmani who smacked 47 runs as an opener. Though he ran short of partners, he was well supported by middle order wicketkeeper batsman P Rohit who hit an unbeaten 39 runs from 65 balls and Th Kishan who got 32 runs from 27 balls. Ng Maheshkumar contributed 19 runs to post 204 runs for 8 wickets from 40 overs.

THAU Thangmeiband bowlers Ranjan Singh, Krishnachandra Singh, despite getting the sticks, managed to pick up 3 wickets each while RK Amarjit fetched 1 wicket.

Langthabal bowler M Subash, Y Vivek bagged 2 wickets each while Th Kishan, Ng Bingson and P Prakashmani fetched 1 wickets each and later Prakashmani was adjudged as the Man of the Match for his 47 runs knock and 1 wicket.

In the next match on Monday, Reyoungster Nagamapal will play THAU Thangmeiband as tomorrow being a rest day for the teams.