Asserting that there is a need for skill-training in the modern context, the Manipur employment minister said there is a need to give re-training to the old labourers as their skill sets need to remain updated. 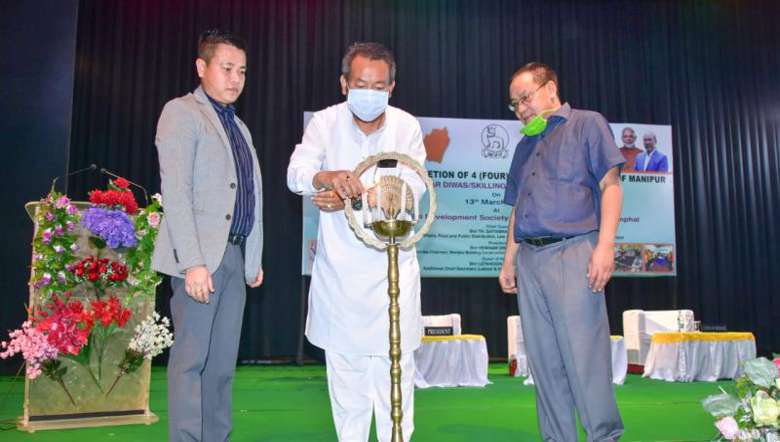 Manipur Labour and Employment Minister Th Satyabrata on Saturday said that giving of job placement to almost 50 per cent of the beneficiaries of Pradhan Mantri Kaushal Vikas Yojana (PMKVY) in the state clearly shows that the state is overcoming the unemployment issue.

Satybrata was speaking as the chief guest of the ‘Rozgar Diwas/Skilling and Employment Workshop’, organised at Manipur State Film Development Society, Imphal. The workshop was held as a part of the ongoing celebration on completion of four years of the Manipur government.

He said of the estimated 2,000 youths were given training under PMKVY while 15,000 were certified and approximately 8,000 youths have got job placement. “This is not a low percentage and we can conclude that our mission has been successful,” the minister added.

Talking about the efforts and sacrifice made by Chief Minister N Biren Singh in bringing a great development in the four years rule of the state government, he appealed to the public to continue extending their support to the government to move more  forward towards development.

Delivering the presidential speech, MLA Heikham Dingo said that Labour and Employment is a very important department; however, it is poor in budget.

With the initiative of the central government, a financial aid of Rs 1,000 has been given to all the Labour card holders during the COVID-19 pandemic through DBT, said Dingo who is also the chairperson of Manipur Building and Other Construction Workers' Welfare Board.

Apprising the officials of the Labour and Employment department to work with full dedication, the MLA sought support from the public in making the department a strong department and tackling the unemployment issue.

The function was attended by additional chief secretary (Labour and Employment) Letkhogin Haokip as guest of honour.

The same occasion was organised by District Administration, Thoubal along with DRDA on Saturday at the Counting Hall, DC office, Thoubal.

Speaking on the occasion, DC, Thoubal N Bandana Devi said that the district has large potential for agriculture including fruits and vegetables which is an employment generating field. She also urged the training providers to organise training in such fields as well and generate employment for the youths.

As a part of the ceremony, the DC also presented Training Completed Certificates to the trainees of the district who have completed their courses under PMKVY.

The programme witnessed the attendance of various training providers, district level officers, trainees and youth of the district. It may be mentioned here that similar workshops were also held at the different block levels and Panchayats.

The programme was organised as a part of four years of the Citizen Centric Governance of the government Of Manipur.

A total of 152 participants attended the function. And during the programme, 50 IFA syrup bottles and 100 strips of IFA were distributed to the women and children.