Those working on protection, preservation of forest, wildlife will be rewarded: CM Biren 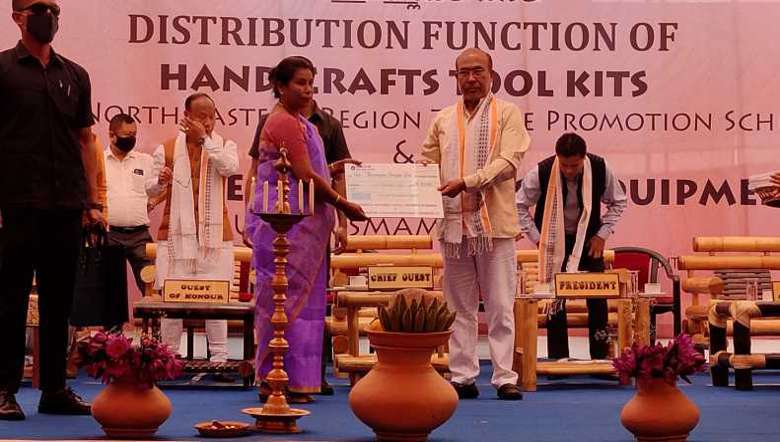 Organisations or people who actively work on protection and preservation of forest and wildlife will be rewarded, Chief Minister N Biren Singh announced on Saturday.

Biren was speaking at the distribution ceremony of handicraft toolkits and agricultural machineries held at City Convention Centre, Palace Compound in Imphal

The items for handicraft were distributed under the North Eastern Textile Promotion Schemes and agriculture under Sub Mission on Agricultural Mechanisation (SMAM) scheme.

Speaking at the function as chief guest, Biren said that ecology and environment is degrading each day in the state. As an impact, Sangai (state animal of Manipur), which is one of the rare species in the world, have become endangered.

The loss of its habitation due to various factors is the root cause behind this situation. It is high time the state along with all walks of life to extend support and cooperation to preserve this rare species before it becomes extinct in a few years, he added.

Biren further said putting focus only on development while sidelining the importance of environment and ecology will result in many negative impacts. Therefore, putting equal weightage in both development and protection of the environment is highly essential, he said.

Mentioning about revenue generation of the state, he said that the financial condition of the state is poor as there are no means to generate revenue. There are hindrances from various sections whenever the government initiates any project to boost the revenue of the state. Nevertheless, the state government had sorted out a plan to increase the economic conditions through a proper tax collection system, he added.

He said that the people of the state hardly pay any kinds of tax like land tax. But in the coming days, the state government will start collecting tax from economically sound persons without fail, he added.

On the completion of four years of BJP governance, he extended his gratitude to the people of the state and also expressed about the progress made by the present government.

President of today’s function, Industry minister Thongam Biswajit Singh said that agriculture and handloom and handicraft are the backbone for resource mobilisation of the state. The ranking for the state in the National Handloom Census report is increasing and it shows that the state is moving forward in the handicraft sector, he said.

While assuring artisans and weavers that all possible support will be provided to them, he encouraged them to produce more attractive and standardized products.