A health and nutrition campaign was launched by the deputy CM as a part of celebrating BJP government’s four years of achievement. 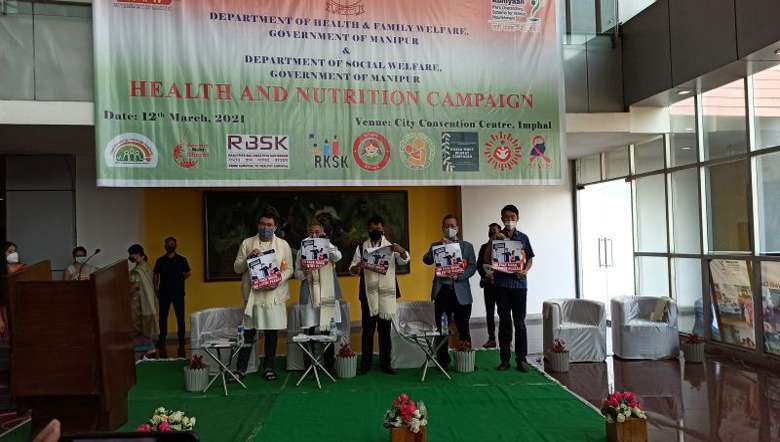 State department of Health and Family Welfare and department of Social Welfare launched a Health and Nutrition campaign at City Convention Palace compound on Friday with the attempt to make a holistic approach in creating awareness about the importance of nutrition and well-being among the people.

The health and nutrition campaign was launched by Deputy Chief Minister Yumnam Joykumar as a part of celebrating BJP government’s four years of achievement. A ‘No mask no entry campaign’ was launched and a ‘Poshan song’ was also released as a part of the occasion.

The deputy chief minister said with the completion of four year’s citizen-centric governance, advancements were achieved in different sectors in the state. Many schemes meant for the welfare of the needy people have been implemented and the people have benefitted from them, he said.

Joykumar said the campaign on health and nutrition is first of its kind in Manipur. Most of the people in Manipur are not aware of and have not understood the advantages of many schemes which are provided for the welfare of people. So, the state government within these four years have started a doorstep campaign like ‘Go to hill’, ‘Go to the village’ to provide the benefits of various schemes. Through such campaigns, the grievances of people had come to light and able to solve most of the issues.

The celebration of four years’ government is being carried out to audit and relook at the achievements. Within these four years, many schemes which remained unknown to people while providing benefits only to the close ones of MLA or ministers have stopped, he said.

The deputy CM also highlighted the importance of nutrition for human beings and issues of mental health during the COVID-19 pandemic.

Advisor to the chief minister (health), Sapam Ranjan said that the COVID-19 pandemic has made the people become more aware about their health. For health and well-being, good nutrition is important, he further said while adding the people should be made aware of the risk factors involved in causing diseases due to ill nutrition.

The state government has taken up various schemes to spread awareness and the need to provide good nutrition to people including pregnant mothers and their unborn children.

“The people may not believe this but 250 kidney transplants took place at one hospital in Manipur last year,” he said. Rising cases of diabetes in the state may be due to consuming huge quantities of starch which are contained in the state’s indigenous rice, he added.

Social Welfare Minister Okram Henry highlighting the important achievements in the last four years, said that 49,486 pregnant and lactating mothers have been enrolled under Pradhan Mantri Matru Vandana Yojna (PMMVY) scheme. Under monetary assistance alliance, financial help of Rs 5,000 per beneficiary has been given to the beneficiaries and a sum of Rs 20.54 crore has been disbursed to the bank and the accounts of the beneficiaries through DBT, he said.

Manipur has been awarded for achieving the all India 3rd Rank in implementation of PMMVY for the year 2019 on February 3, 2020 by the ministry, he added.

The department is organising various programmes to prevent gender-based sex-selective elimination, to ensure survival and protection of girl child and to ensure education and participation of the girl child throughout the state under Beti Bachao Beti Padhao scheme. The ministry has also awarded Senapati district for excellent implementation of the programme under district competition category on National Girls Child Day, 2019.

The social welfare minister said the department has launched Chief Ministergi Shotharabasingi Tengbang (CMST) Scheme on December 3, 2017, for the empowerment of persons with disabilities and homeless older persons. Around 9,000 beneficiaries are being provided benefits under various sub-schemes of CMST.

The department has identified 744 persons with disabilities under Assistance to Disabled Persons for Purchase/fitting of aids and appliances (ADIP) Scheme and 3,629 numbers of senior citizens under Rashtriya Vayoshree Yojna (RVY) scheme were provided suitable aids and assistive devices during 2019-20. These schemes will continue in the remaining districts of the state, he said.

Henry announced that the state government has identified 20,833 deserving beneficiaries during the "Go to village mission" and started providing pensions under the Manipur Old Age Pension Scheme.

The department is taking serious steps on the "War on Drugs" mission by introducing ‘The Manipur State Policy on Psychoactive Substance Use, 2019’ to control widespread use of psychoactive substances and address the issue in the state with appropriate facilities for treatment and rehabilitation and other preventive measures, he said.

Under Poshan Abhiyaan, Nutri Gardens in sixteen Poshan districts have also been started under innovation projects, he further said while adding 2,600 smartphone, 5,368 growth monitoring devices hves been procured for use by Anganwadi workers and supervisors, he added.

‘Sakhi-One Stop Centre’ is operating in all 16 districts of Manipur, he said. Construction of 845 Anganwadi centres under Phase V has been completed and it is going on for 155, he said. Fifteen working women hostels have been constructed for accommodation for working women with daycare facilities for their children up to the age of 5 years both in urban and rural areas where employment of women exist, he said.

Under supplementary nutrition programme 3, 99, 418 numbers of beneficiaries have been enrolled, he added.

The minister mentioned that nutri-gardens and tree corners will be developed in all the 11,510 Anganwadi Centres, he said. 3,000 additional numbers of Disability Certificates under Unique ID for persons with Disabilities (UDID) will be generated online. Construction of 1,000 Anganwadi Centres under the sixth phase will be completed, he said.

Altogether 23 stalls were opened at the campaign which was held in connection with Health and Nutrition of people and schemes for health.

CM Biren announces to inaugurate 200 projects, lay foundation stones for many others