The term ‘War on drugs’

IFP Editorial: As compared to elsewhere, Manipur’s War on Drugs is nowhere and it even does not deserve to be called a ‘war’. 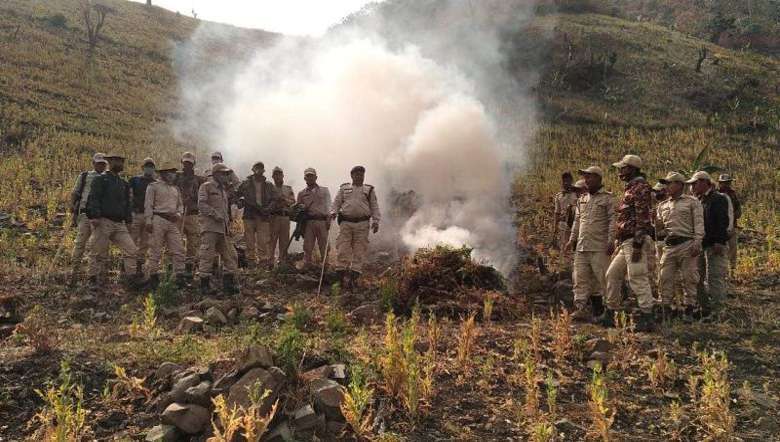 The one important thing not clearly spelt out in the so-called War on Drugs launched by Chief Minister N Biren Singh has been the basic policy directed towards the drug addicts or victims of drug abuse in the state. How do the state view the individuals or groupings as covered by the overarching policy of War on Drugs? Is there a differentiation between the addicts or victims, small time peddlers and the drug lords as fashionably termed by several NGOs or say the major players? Well, the general impression is that the state is targeting the victims and simplistic poppy farmers while protecting the interests of the major players. Stranger than fiction is that, the state is doing nothing to turn the discourse to its advantage except for some chest thumping exercises of staged pledges and rallies.

Mind you, as many as 18 organisations including several student bodies have strongly condemned the recently enacted October 15 Ordinance on narcotic drugs and psychotropic substances which they say is unconstitutional and regressive. They say, the Ordinance only targets the drug users, not drug lords. The Ordinance was basically aimed at enhancing the quantum of punishment of persons arrested with ‘small quantity’ and intermediate quantity of narcotic drugs and psychotropic substances. The NDPS Act in short is a Central act and any modification requires the approval of the Central government. According to this Act, any person found with the possession of prohibited drugs is differentiated by the quantity as defined under small quantity and commercial quantity. Another category which is beyond the ‘small quantity’ but not up to the commercial quantity prescribed has been referred to as intermediate. The definition of small quantity or commercial quantity differs according to the drugs or psychotropic substances so mentioned. For example, 2 grams and 50 grams are listed as small quantity and commercial quantity in terms of amphetamine, while it is 5 grams and 250 grams in terms of heroin. The differentiation is there for others like Charas, Cocaine, Ganja, LSD, Methadone, Morphine and Opium etc.

We understand the state government’s intention is to usher in a deterrent to small time drug users in view of the rising drug abuse in the state by enhancing the penalties. What we fail to understand is why it chose to leave out the penalty provisions of persons dealing in commercial quantity of drugs and psychotropic substances for that matter drug peddlers and drug lords in the Ordinance.

Illicit drug use is a health issue that requires targeted, non-criminal, interventions starting with the individual. It’s also a systemic problem that requires socio-political measures that address poverty, corruption and social exclusion.

The world has seen enough of ‘War on Drugs’ undertaken by various governments and in some cases it involved death penalties or life imprisonment of drug smugglers and even summary executions without going through legal processes. As compared to elsewhere, Manipur’s War on Drugs is nowhere and it even does not deserve to be called a ‘war’. Thailand’s experience shows that the real culprits at the top of the drug pyramid often escape extra-legal approaches to eradicating drug problems with impunity. After thousands of deaths, Colombia and Mexico discovered the same truth decades ago. The Philippines is a producer, a transit point, and a consumer of narcotics. Each role requires specific policies that involve the entire state apparatus, as well as civil society. The drug trade is a transnational threat; this means neighbouring states have to work together to fight.

Political leaders who want to wage wars against illegal drugs also open the possibility of power abuse from the security sector. In places with rampant corruption, lack of police professionalism, a culture of impunity, and links between drug lords and political elites, governments are susceptible to declare “regimes of exception” where security forces are given extra-legal powers in order to succeed in their mission.