The tree plantation programme was carried out as part of the celebration of completion of four years of citizens centric governance of the BJP-led government in Manipur. 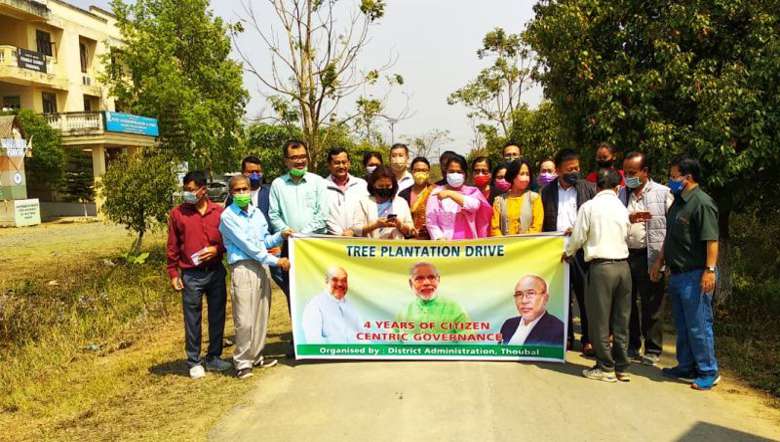 The district administration, Thoubal along with district forest office, Thoubal on Thursday organised a tree plantation programme as part of the celebration of completion of four years of citizens centric governance.

The tree plantation programme was carried out by district level officers under the supervision of DC, Thoubal N Bandana Devi. On the occasion, the DC highlighted the importance of tree plantations to curb the increasing pollution in the environment. She also planted tree saplings inside the premises of the DC office to mark the occasion.

Under the supervision of ZEO, Thoubal, tree saplings were also planted in school compounds. NYK, Thoubal along with local clubs and organisations also took part in the tree plantation programme.

The district health society Thoubal under the supervision of the district administration Thoubal also conducted tree plantation programmes at community health centres, primary health centres and Health and wellness centres of Thoubal district. It was organised as a part of the celebration of the 4 years of citizen centric governance.

The tree plantation drive which was conducted at the health facilities of the district was launched by CMO i/c Thoubal Y Nokul Singh and district programme manager, Thoubal Ch Basanta Singh, while MO in Charge, CHC Heirok Ramananda Singh launched the programme held at CHC Heirok.

Ch Basanta Singh further thanked the DFO for providing the saplings and also the health facilities for making the plantation drive a grand success.

Cleanliness drive carried out in Tamenglong