CM Biren announces to inaugurate 200 projects, lay foundation stones for many others

The BJP-led government is going to celebrate its 4th year of governance in Manipur on March 15. 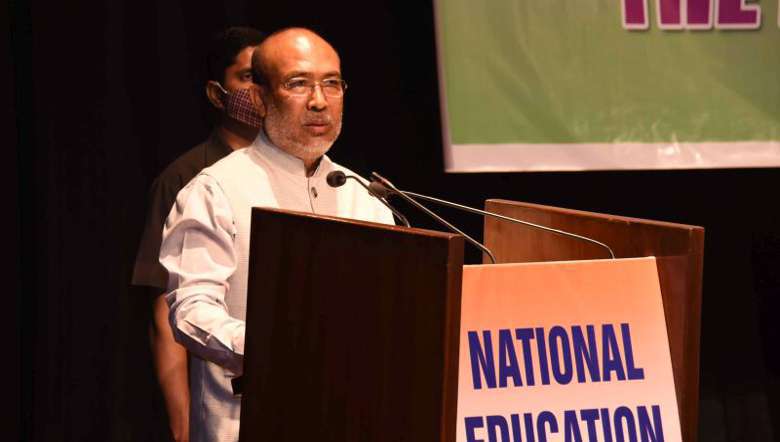 Manipur Chief Minister N Biren Singh on Wednesday announced that around 200 projects are going to be inaugurated and the foundation stones will be laid for another 150 projects after March 15, a day when the ruling government completes its four years of governance.

He was speaking at the one-day panel discussion on National Education Policy, 2020 held at City Convention Centre, Imphal on Thursday. The programme was organised by the department of education.

Speaking as the chief guest, Biren said that the present government is going to complete its four years of governance on March 15. The government is going to celebrate its 4th year of governance in the state on the said date to highlight the policies and programme and developmental projects they have taken up.  After the programme, all the completed projects of almost 200 in numbers will be handed over to the public by conducting a series of official inaugurations. Along with this, foundation stones will be laid for new projects, he said.

To resolve the problems of accommodation faced by government officials due to insufficient quarters, the government has constructed 19 transit accommodations in rural and interior parts of the state, he added.

Mentioning about demand made by Manipuri diaspora in Assam to allow them to give Assam Public Service Commission in Manipuri language, Biren announced that chief minister of Assam has accepted the said demand.

He further said that there is a requirement for maintaining good connection between administrators of the Education department and teachers in order to promote quality education. This would help in filling up the required amenities and infrastructure on time.

Biren said that education is the backbone of society. For this reason, the government of India has framed this comprehensive policy -“National Education Policy,” he said. Effective implementation of the said policy would bring tremendous change in the education sector and also resolve the problems of unemployment  faced by educated people, he added.

He further said the government is ready to fulfill the basic requirement to implement the policy. The people should also extend their endless support as nothing can be achieved without their participation and involvement, he asserted.

He further said that to begin this programme shortly, the government is going to recruit 90 teachers through Manipur Public Service Commission (MPSC) soon. Besides, 20 non-teaching staff will also be recruiting.

Rajen said the state government had already been focusing on the education sector even before the launching of the National Education Policy. The government had launched its ‘School Fagathansi Mission’ to gain credibility and quality of government which existed at one time. With the advent of the mission, the rate of school drop-out has been reduced to great extent and new enrolments have increased.

At present, there are around 34,000 students in government schools which had around 26,000 before the launching of said mission, he informed.