The government is taking the initiative of stopping Jhum cultivation and the project of reducing the practice of jhumming has started, the Manipur forest and environment minister said. 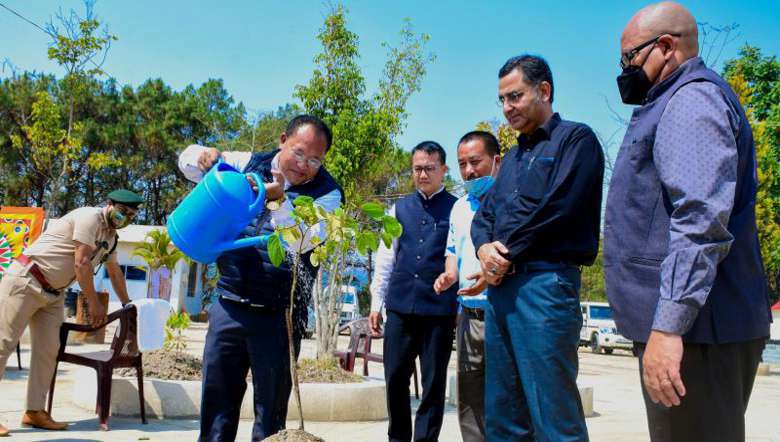 The state cabinet has selected the state Forest department as nodal department and framed a jhum control policy for Manipur, for which the assent from the Agriculture and Horticulture Ministry is awaited, forest and environment minister Awangbou Newmai said on Thursday.

The minister was speaking at the tree plantation drive held at Cheirao Ching, Imphal West as a part of the ongoing celebration of four years of achievements by the government of Manipur.

The minister, celebrating the four years of achievement stated that tree plantations are continuing at different villages. At present, the plantation is going on in ten villages of Churachandpur and ten villages of Tamenglong, he said. The state government during these four years has taken up various activities, created policies and programmes for the welfare of people, he further said adding the plantation has been done about 22,730 ha in the state under the Forest department.

Newmai said the people especially the youths of Manipur are taking part in preserving the forest and protecting wildlife. The awareness among the public has been increasing and Manipur will take the initiative in protecting forest and wildlife, he added.

The minister mentioned that awareness of protection and preservation of living beings and environment has already spread in Manipur. As a result, village youths are organising awareness programmes for conserving the environment. Such activities show the level of awareness and involvement of people, he said.

Protecting, preserving, and conserving forest or wildlife or living beings would not be successful without the people's involvement. The department or the authorities are taking risks and responsibilities but it requires people's support, he added.

The minister said that the women of hills are forming self-help groups to collect forest products and the government has provided training for transforming the collected things into useful products. It is all for protecting forests and giving livelihood, the minister said.

He also informed that forest officials and forest guards have been facing difficulties in discharging their duties in the forest. To resolve the issue, the state cabinet has decided to provide single and double barrel guns within a few weeks.

Who said Jhumias are the villains?