A hard day’s labour in the poppy fields

IFP Editorial: Instead of blaming the poor villagers the state’s focus should be on finding the facilitators of poppy farming on our side of the border, for they would be the actual beneficiaries. 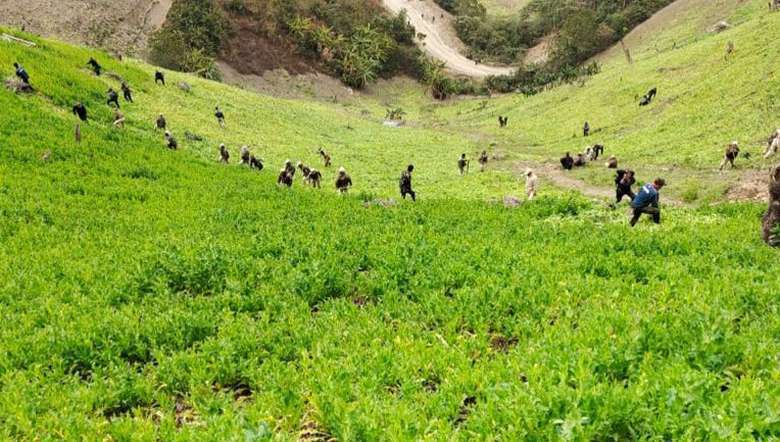 The other day we had speculated on the possibility of the shift of poppy cultivation in areas of Manipur as a direct fallout of the diminishing trend in the Golden Triangle and Myanmar, and that we should be looking for the factors leading to upsurge in poppy cultivation in the hill areas of Manipur in recent times. Poppy cultivation was found in small pockets of the hills bordering Myanmar about two decades ago by journalists. Word then was that the poppy cultivators of the state sell their opium produce to small-time drug smugglers who operate mobile drug manufacturing units across the border. Now, poppy cultivation is widespread in the hills of Manipur and several factors could have contributed to such an explosion. The state was quick to blame the poor villagers who they say resorted to poppy cultivation as they looked upon it as a ‘cash crop’ yielding easy money and quick dividends. According to investigating agencies, poppy cultivation is rampant in Manipur as the same fetches more money than other crops and the farmers are also supported by the drug mafia and the cross-border network of illegal drug traders. However, instead of blaming the poor villagers the state’s focus should be on finding the facilitators of poppy farming on our side of the border, for they would be the actual beneficiaries. As regards the poor villagers who toil in the poppy fields, it is just another day’s work. For them, it does not matter whether it is poppy or any other crop as long as they get the wages howsoever meagre it may be.

It was never in the minds of the state political leaders to look deep for causes which had led to the present scenario as they looked as always for the easy explanation. As the state talked of alternative crops or means of livelihood, they never cared to scientifically assess which crop or livelihood is suitable to the hills of the state or socially acceptable to the hill people. Another factor is the absence of land tenure system in the hills, more particularly in the Kuki areas where the chieftains ruled supreme. The talk of alternative crop or means of livelihood will always be foreign to the ears of the hill people like the message of alternating jhum cultivation which had fallen on deaf ears.

There are ways of side-stepping traditional practices but one must be very careful about it so as not to antagonise their belief and tradition. So, one must understand that pledges or rallies are not going to solve the problem of poppy cultivation in the hills.

Where had they acquired the know-how or expertise of refining opium into either brown sugar or pure grade heroin? As regards Churachandpur district, one can safely assume the cross border movement of tribes having cultural affinity on both sides of the border for the said expertise. But, it does not explain the emergence of heroin factories in Muslim dominated areas unless the expertise is exported from the Golden Crescent area, which is a major producer today. So, agencies need to probe this angle also.

Go to the opium fields