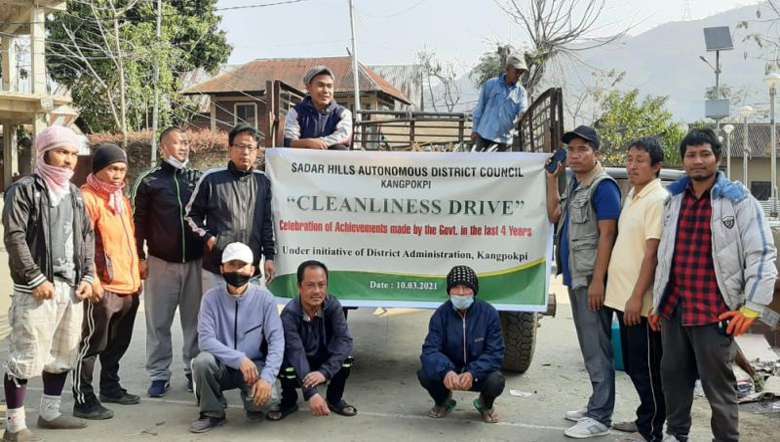 As per resolution of meeting chaired by deputy commissioner Kangpokpi on Tuesday, Sadar Hills Autonomous District Council Kangpokpi conducted a cleanliness drive in Kangpokpi town on Wednesday morning in connection with celebration of achievements by the BJP-led government in the last four years.

The cleanliness drive was also the commencement of various activities scheduled to be taken up by different departments in the district under the aegis of District Administration Kangpokpi in connection with celebration of achievements made by the government in the last four years.

Garbage/waste materials of around hundred shops and vegetable vendors were collected by two sanitary vehicles with the help of staff and employees of Sadar Hills Autonomous District Council Kangpokpi and later disposed of at the dumping site.

All shops owners/vegetable vendors were also informed to maintain proper dustbin and cautioned that appropriate action shall be taken to the defaulters.

They were also briefed about the upcoming celebration on achievements of the government in the last four years.

According to the tentative programme and venue for celebration of the achievements of the government in last four years, tree plantation drive, illumination, gates,  village health nutrition, COVID appropriate behaviour and COVID vaccination awareness programmes and rozgar diwas/skill and employment workshop shall also be conducted by various departments on the schedule date and time before the main district level celebration shall be held on March 15 at Sadar Hills Autonomous District Council Kangpokpi hall.