CM Biren also gave assurance that the government would try to complete the installation of the statue of General Thangal and unveil it on August 13 (Patriots’ Day), 2021. 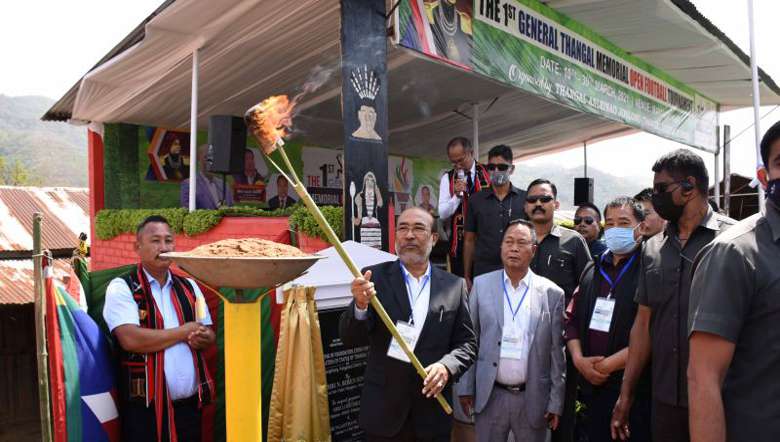 Manipur Chief Minister N Biren Singh kicked off the 1st General Thangal Memorial Open Football Tournament 2021 at a formal function held at Mayangkhang Playground, Kangpokpi district on Wednesday. The tournament which is to be held from March 10 to 30 is organised by Thangal Students’ Union.

The CM also laid the foundation stone for installation of the statue of General Thangal and paid homage to the portrait of the great leader. He was accorded a warm welcome by the people of Thangal Community who were dressed up in their beautiful traditional costumes.

Speaking on the occasion, N Biren Singh said that General Thangal was one of the great leaders who fought against the mighty British to save their motherland and it is because of their contributions that the people of the state are living their life freely today. Maintaining that many other unknown soldiers had also sacrificed their lives in defending the freedom of the state, he expressed that the people should not forget these unknown soldiers and should pay homage to them.

CM Biren also gave assurance that the government would try to complete the installation of the statue of General Thangal and unveil it on August 13 (Patriots’ Day) of this year. An amount of Rs 1 crore had been sanctioned for this, he said. He further informed that Thangal General Ecological Park at Mayangkhang would be enlarged and a gate would also be installed to a proper place consulting the Thangal community. He also added that the Senapati Water Supply project would be inaugurated before March 31 this year.

Mentioning that there is no religion and politics in sports, he assured that the government would consult with All Manipur Football Association (AMFA) to recognise the General Thangal Memorial Open Football Tournament to the State Level and a separate fund would also be allocated for organising the tournament. He also announced that a statue of Chirai Thangal, also known as Chirai Naga, would be installed at a proper place in Imphal area.

Asserting that bandhs and blockades hinder developmental works, he appealed to the public to approach the authority concerned with their grievances instead of resorting to such acts. He also appealed to the players participating in the tournament to play fair.

PHED minister Losii Dikho, while addressing the gathering, said that Thangal Community, although a small community, had witnessed great leaders in the past and so the youths of the community should try to live up to the level of the leaders following their paths. He also appealed to the players to participate in the tournament seriously.