Shifting of government offices to mini secretariat starts in Tamenglong

Deputy commissioner of Tamenglong Armstrong Pame said that shifting of all the offices would be completed and start functioning by the end of March. 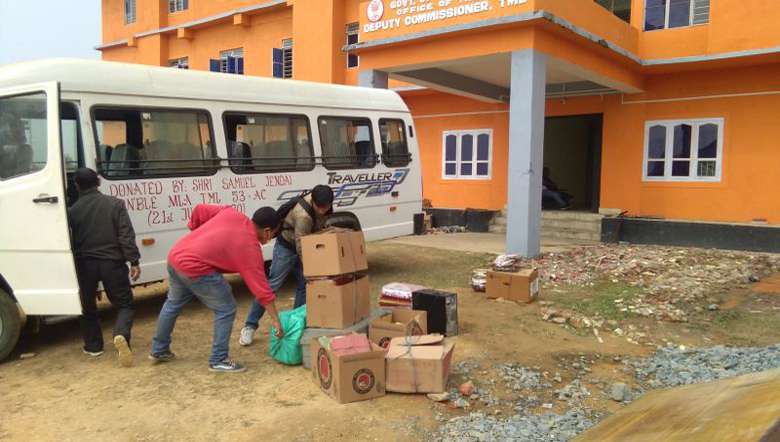 The deputy commissioner, Tamenglong along with the Revenue department and DRDA, Tamenglong started shifting their offices to Mini Secretariat Complex at Farmlane on Tuesday.

The mini secretariat complex, which is about 4 km from the district headquarter, was constructed by Axial Builders Private Limited, Tamenglong during the Congress-led government. It was inaugurated by the then Union Home Minister P Chidambaram in the presence of the then state chief minister O Ibobi Singh, MPCC president Gaikhangam and Hill Area vice-chairman Khangthuanang Panmei on November 3, 2011.

After 10 years, the present district administration led by deputy commissioner of Tamenglong Armstrong Pame finally started shifting to the mini secretariat complex of the district.

Speaking to the Imphal Free Press, Armstrong Pame said that with support from Chief Minister N Biren Singh and Forest Minister Awangbow Newmai, and under the instruction of the chief secretary, the office was finally shifted to function in a new place. The decision to shift all government offices to the present site was taken during the chief minister’s visit and public meeting held at the mini secretariat complex on January 29, he added.

The DC further informed that a bus service has been facilitated from Tuesday starting from Jadonang Park to the mini secretariat site with a passenger fare of Rs 20 at three terminals at 11 am, 1 pm and 3 pm, respectively.

Pame also said that shifting of all the offices would be completed and start functioning by the end of March and the departments that refused to shift would be reported to the chief secretary for further action.