Substance abuse by children could be resolved through support and care 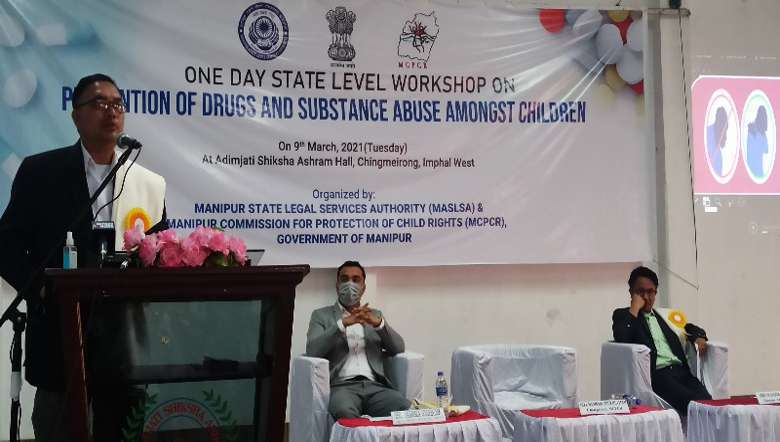 The rising trend of substance abuse by children of 10-11 year olds have reached an alarming stage; however, such issues can be overcomed through support and care instead of resorting to hostility, criticism and exclusion, Manipur Commission for Protection of Child Rights (MCPCR) chairperson Phurailatpam Manibabu Sharma said on Tuesday.

He was speaking at the one-day state-level workshop on ‘Prevention of Drugs and Substance Abuse amongst Children’ which was organised by Manipur State Legal Services Authority (MASLSA) and MCPCR, the government of Manipur at Adimjati Shiksha Ashram Hall, Chingmeirong.

In his keynote address, he deliberated upon the impact of drug menace among children in the context of Manipur and highlighted the diversification of drugs and drug users in the past with the present. Minimization of drug abuse, if not for total eradication, is possible with the collective efforts of all stakeholders with selfless dedications, he said.

He said parents should know the signs of substance abuse to prevent children from falling into the influence of drugs. It is true that the risk factors for becoming addicted to a substance vary from person to person; however, there are also common factors, he added.

Sharing his experience of inspecting some schools in Imphal, he said that sachets and containers of gutka, khaini, tobacco and cigarettes were found at toilets and washrooms in most of the schools.

Manibabu urged the people and all stakeholders to protect the children from substance abuse.

Social Welfare department director Ngagom Uttam said community participation in preventing drugs is increasing in the state. It is worrisome to find out that children at the very young age of 10 have started using drugs in the state, he said. On the other hand, the early age is the stage of curiosity and children want to get a taste of anything, he further said. But substance abuse at an early age leads to forming a habit easily and they end up becoming addicted. Such addiction at an early age is very serious as they may not be able to quit, he added.

He suggested giving awareness to children with facts and the evidence and adding career counseling as well.

Deputy member secretary of Manipur State Legal Services Authority (MSLSA) Sadananda Sorokhaibam also deliberated upon the importance of legal knowledge and the need for mass awareness in tackling drug menace amongst children. He also highlighted the laws relating to drugs under NDPS Acts and legal provisions on rehabilitation. He said using drugs at a young age is because of the availability of the supply chain.

Several recommendations such as the opening of child-friendly treatment and transgender rehabilitation centres, the inclusion of awareness on drugs in school syllabus, development of Witness Protection Schemes, etc. were adopted at the end of the session. The programme was also streamed live on the official Facebook page of Manipur SLSA and YouTube channel of KhutSem Live for wider outreach and coverage. The panelists also addressed queries from viewers from the mentioned social media platforms.