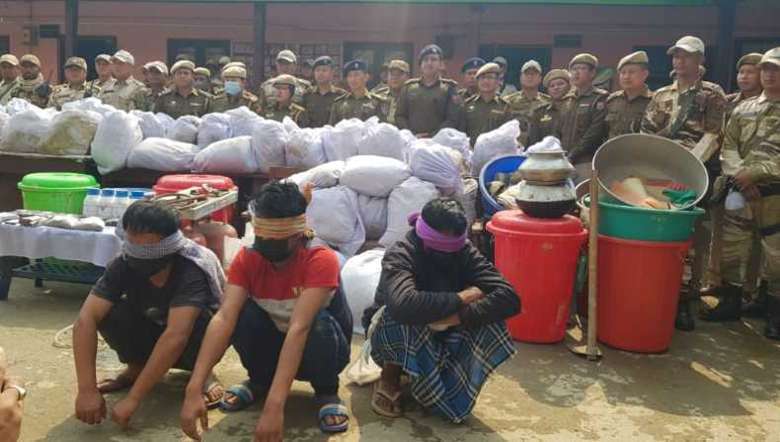 SP Ibomcha said at a press briefing held at Thoubal Police Station that at about 8.45 pm on Sunday, acting on information of manufacturing of Heroin/brown Sugar at Lilong Nungei area, teams of commando Unit Thoubal, Thoubal Police station and Lilong Police station rushed to the spot and conducted a house search at the houses of Md Maneruddin, 49, son of Late Md Najeruddin of Lilong Nungei Khunou Mamang leikai and Md Manergul, 53, son of Late Md Najeruddin of the same locality.

During the house search, the SP said that at around 10.50 pm, the team busted two Heroin  Brown Sugar Laboratories which have been running in the houses of above two persons following the seizure of Heroin Brown Sugar powder (refined) weighing 565 grams, 1104.98 kg of Heroin Brown Sugar, 5 kg. of opium, 131 litres of Morphinated Liquid and other items.

Further, from the house of Md. Manergul, Heroin Brown Sugar. 53./ 20 kg. one pair of pressing boards, one plastic tub, one plastic Brite and Rs 61,400 in cash were also seized, the SP informed.

The SP also said that during the drive, three persons have been arrested and they were identified as Md. Yunush Khan , 22, son of Md. Maniruddin of Nungei Mamang Leikai, Bogimayum Sher Shaha, 23, son of B Sheraj Ahamad of Uchiwa Haotabi Makha Leikai and Md Manergul, 53, son of Late Md Najeruddin of Lilong Nungei Khunou Mamang Leikai.

The SP mentioned that at least four persons who are involved in the drug manufacturing are still at large. They have been identified as Md Akbar Khan, 51, son of  Md Chaoba of Thoubal Moijing Wangmataba. He is the Supplier af Opium, an ex-Head Constable who was dismissed from his service on October 28, 2020 for involving in drug case.

Stating that without the support of public, police can't seize drugs or do nothing, the SP appealed to the public:  "Please support police to eliminate drugs from the society. Let us make a drug free society".