Charge of the Ibobi brigade

IFP Editorial: After successive attempts to dislodge the BJP-led government, the Congress is now banking upon the disqualification of the 12 MLAs who were once appointed as Parliamentary Secretaries. 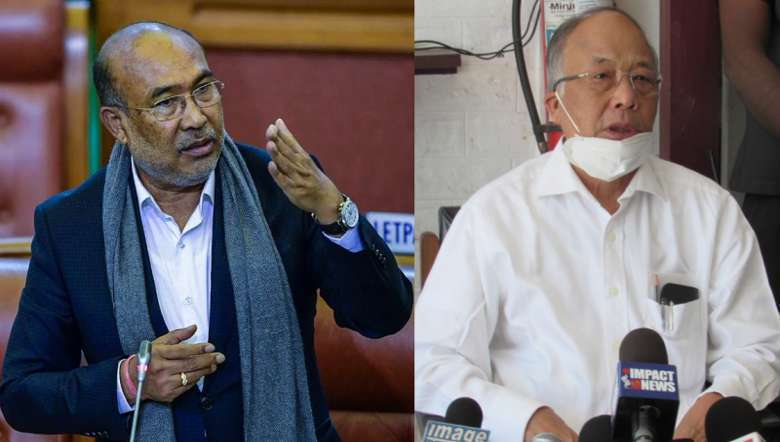 If at all, The Print report regarding Election Commission of India’s opinion regarding the disqualification matter of 12 Manipur MLAs is to be believed, Chief Minister N Biren Singh can certainly breathe a sigh of relief. The opposition Congress party is on the warpath with former Chief Minister O Ibobi leading the charge. After successive attempts to dislodge the BJP-led government, the Congress is now banking upon the disqualification of the 12 MLAs who were once appointed as Parliamentary Secretaries. After a series of twists and turns ranging from dissension and defections to withdrawal of support by allies, Chief Minister N Biren Singh is now firmly in the seat and has now a sizeable number and full backing from the top leadership of BJP. While internal dissension has simmered down in the past months, the bargaining capacity of its allies like NPP and NPF had been greatly reduced. All that remains is the fate of the 12 MLAs which includes three from NPF and one Independent MLA. The BJP has now 23 MLAs. At present, the Manipur Legislative Assembly has now an effective strength of 53 legislators, with four disqualified and three BJP legislators whose resignations were accepted by the Speaker.

Now, the state Congress delegation is right now parked in New Delhi to push the disqualification issue of the 12 MLAs. While ECI officials informed the Congress delegation that it has already communicated its opinion in January, The Print reported that the Election Commission (EC) has opined in favour of 12 Bharatiya Janata Party (BJP) MLAs from Manipur, who were facing disqualification in a 2018 ‘office of profit’ case for holding the position of parliamentary secretaries. While the law relevant to office of profit bars MPs and MLAs from holding a position under the government, the BJP MLAs did not seem to commit any violation as they had held the posts of parliamentary secretaries in the state under an exemption granted by two laws passed over the last decade. These were the Manipur Parliamentary Secretary (Appointment, Salary and Allowances and Miscellaneous Provisions) Act, 2012, and the Manipur Parliamentary (Appointment, Salary and Allowances and Miscellaneous Provisions) Repealing Act, 2018. Both Acts ceased to exist after the Manipur High Court pronounced them invalid and unconstitutional in a judgment on 17 September 2020. After the HC declared these Acts void ab initio, the Manipur Congress had approached Governor Najma Heptulla seeking disqualification of the 12 BJP MLAs on account of holding the position of parliamentary secretaries, which qualified as ‘office of profit’ after the HC ruling.

Responding to The Wire news report about the discussion between Manipur governor and ECI over the disqualification of 12 BJP MLAs, the Election Commission of India spokesperson Sheyphali Sharan said ECI never discusses a privileged communication. This however does not say that the news-report is incorrect. Even if it is true, the Congress is bent on exhausting all avenues of appeal. They had gone to the Supreme Court before, and they will go to the apex court again. The question till now was how the Biren government tries to extricate itself out of this mess. The N Biren Singh-led coalition ministry was sworn in on 15 March 2017 and assembly elections are due in March 2022. And he had never a spell of comfort all this time without worrying who might stab him in the back or jab from the front. The latest is the last strategy of the Congress to pull down the government.