Representatives of FEGOCTA and AMCTA met CM Biren on Saturday and discussed the long standing demand of the college teachers for payment of salary as per UGC 7th Pay Commission. 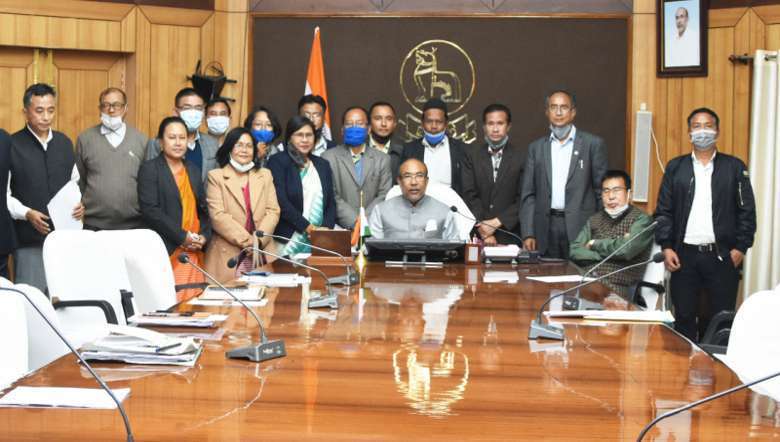 Government college teachers of Manipur called off cease work strike on Saturday following a memorandum of understandings (MoU) signed between representatives of FEGOCTA, AMCTA, and the state government.

Representatives of FEGOCTA and AMCTA met Chief Minister N Biren on Saturday and discussed the long standing demand of the college teachers for payment of salary as per UGC 7th Pay Commission, in the presence of Education Minister S Rajen and other officials.

In the memorandum, it was also agreed that no disciplinary action will be taken against any of the teachers who had participated in the strike for the demand of UGC 7th Pay and Recommendation.

Earlier, in a release on March 2, FEGOCTA had stated that if the cabinet decision on national policy UGC policy is not implemented, one can imagine the state of affairs of the collegiate education in Manipur. Yet, the teachers are blamed for the present disturbing collegiate education and cease work agitations, it added. FEGOCTA has also stated that the implementation of UGC 7th Pay and Regulations 2018 will help in transforming college education in Manipur. Taking serious note of the cabinet decisions and assurance of the state government and considering the interests of the students, FEGOCTA had previously suspended four agitations.

The government college teachers carried out the cease work strike for 12 days till March 2, demanding implementation of the UGC 7th Pay and Regulation, 2018. Prior to the cease work strike, college teachers had been taking up different forms of agitation such as sit-in protests in different colleges of the state and mass casual leave since January 28.