The All Manipur Working Journalists’ Union (AMWJU) and the Editors Guild Manipur (EGM) urge all parties to uphold ‘Local code of Conduct’ of scribe body. 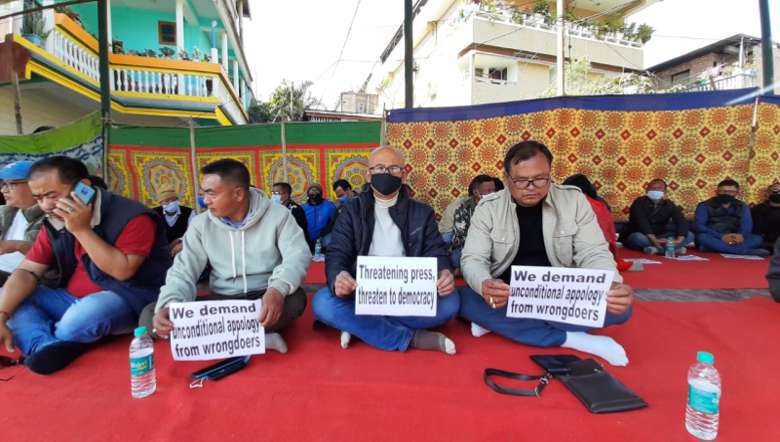 The cease work protest of the media fraternity ended on Saturday following a resolution taken by a public convention held on Friday at the Manipur Press Club, Imphal.

The public convention was attended by representatives of civil bodies, members of the All Manipur Working Journalists’ Union (AMWJU) and the Editors Guild Manipur (EGM).

A joint statement issued by president of AMWJU Bijoy Kakchingtabam and president EGM Khogen Khomdram urged all parties to acknowledge and uphold the ‘Local code of Conduct’ drawn up by AMWJU so as to enable the media in Manipur to function freely and fearlessly.

It condemned all forms of attacks and threats, including the yet to be solved, issue of lobbing a bomb at the office of Poknapham and People’s Chronicle by an unidentified woman and urged the state Home department to expedite closure of the case by arresting the individual responsible for the bomb attack.

The statement also mentioned that AMWJU and EGM acknowledged the sentiment of the public leaders who spoke at the convention and thanked them for their support to the media of Manipur at such crucial moments when it is going through a crisis.

As per resolution taken, the media organisations called on all stakeholders of the media, which shall include the state as well non state actors, civil organisations and general public, not to give any obstruction to the media while it is performing its duty, it added.

Asserting that speakers in the convention recalled that the Manipur media have been shut down on several occasion in last few weeks following pressures from few quarters, it also stated that office bearers of AMWJU and EGM met several times during the crisis and took several resolutions to safeguard the “freedom of speech” and freedom to function unhampered. This is the third cease-work protest in less than a month resulting in the blackout of news in the state for days.

Both the presidents of the AMWJU and EGM put on record the decision to call the public convention following scaling up of the pressure despite the organisation taking resolutions to protect its freedom, the statement mentioned. It also condemned the action of the Manipur government, which tried to use the new online media regulation made by the central government in Manipur for the first time in India.

Appreciating the state government for promptly withdrawing the notice served to an online portal in Manipur, the statement also warned that it would not remain mute spectator to effort by the state to illegally muzzle the press.

AMWJU and EGM were against the fake news and hate propaganda being spread using various social media platforms, it added.