During the awareness programme, emphasis was given on soil solarisation, crop rotation, deep summer ploughing, planting of marigold, mustard and use of bio-control agents. 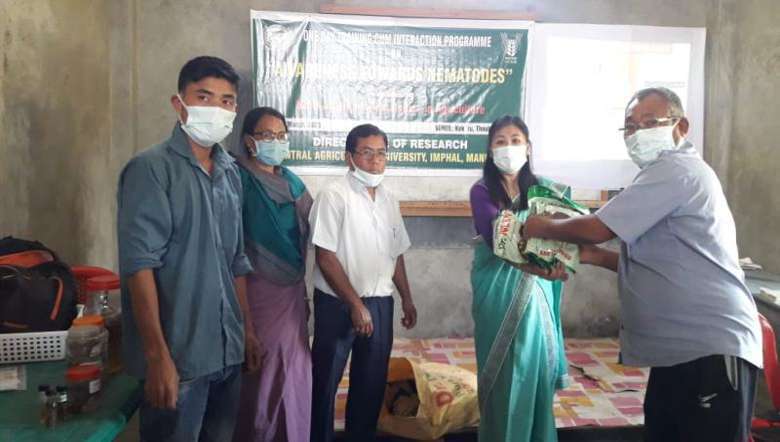 Addressing the programme participated by more than 60 farmers, one Thangjam Ramesh Meitei, who is a farmer, mentioned the importance of the training programme on nematodes and added that such training is necessary for the farming community as farmers are still unaware of the nematode problems in crops.

Assistant nematologist of AICRP (Nematodes), CAU, Imphal Centre, Dr Kshetrimayum Sumita started the training programme with an introduction to nematodes: what is nematode, how it looks like, what are the losses caused by them. She deliberated on the possible symptoms in the fields and the measures to manage crop loss.

Defining the meaning of nematode, the resource person mentioned that it is a zoological term for a worm of the large Phylum Nematoda, such as roundworm or threadworm that could increase infestation in insects to cause disease. She also gave the presentation on nematode pests of vegetables and rice as well as on the emerging nematode problems in different crops like potato, garlic, onion, passion fruit and others. She reiterated that crop protection consists of entomology, plant pathology and nematology, economic importance of nematodes in agriculture, difference between nodules and root-knot.

During the awareness programme, emphasis was given on soil solarisation, crop rotation, deep summer ploughing, planting of marigold, mustard and use of bio-control agents along with organic manures like Neem cake for the management of nematode problems in vegetable crops and rice fields.

Wet preservation of infested roots by root-knot nematode on different crops like cucumber, tomato, king chilli, French bean, brinjal and others collected from other parts of Manipur as well as live specimen of plant parasitic nematodes were also shown to the farmers.