The threat within and without

IFP Editorial: Once again, Poknapham has been threatened to stop publication for six months by a group. A joint meeting of All Manipur Working Journalists’ Union and Editors’ Guild Manipur have decided on a 48 hour cease work strike of journalists. 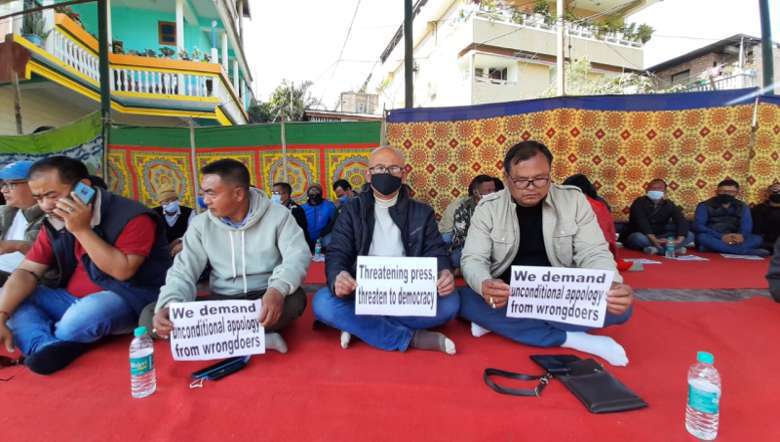 Twelve years ago, a young journalist named Konsam Rishikanta Singh of Imphal Free Press was found shot dead in a lonely road within the Greater Imphal area. The local press fraternity suspecting the hand of state forces had then made a demand for a high level inquiry. Newspapers went off the stands for 13 days till the government came to senses by deciding to hand over the case to the Central Bureau of Investigation (CBI). The mystery of Rishikanta’s murder still remains unsolved till today. That 13 day news blackout was the longest period of protest by Manipur journalists. A few weeks ago, a hand grenade was lobbed at the offices of Poknapham daily and its sister publication Peoples’ Chronicle at Keishampat and Imphal based newspapers went off the stands for six days. The state police is investigating hard to find the people behind the recent incident. A Special Investigation Team (SIT) led by the Imphal West SP was even formed, but there are still no leads as to who or which group are involved in the Poknapham incident. Once again, Poknapham has been threatened to stop publication for six months by a group. A joint meeting of All Manipur Working Journalists’ Union and Editors’ Guild Manipur have decided on a 48 hour cease work strike of journalists.

Time and again, the journalist community and the media has been the target of threats from both state and non-state actors since the conflict began. The pressure from non-state comes mostly from small factions in their bid to gain legitimacy through the media. These groups look upon the media as a notice board for posting their threats and summons to their victims, and mud-slinging between these factions. The threats were sometimes directed not only on the editors and journalists but indirectly on newspaper distributors so as to bring editors into submission. But being a journalist in a conflict zone is always a risk and over the years the Manipur journalists have learned to take it in their stride, of course, in the hard way. There are several instances of journalists being killed, assaulted or intimidated in one way or the other. In the past, the state actors security forces and state police were very crude while intimidating the press. But it has diminished in the last decade or so and they seem to be using subtler methods of persuasion.

About two decades back, the journalist fraternity were fragmented with several organisations springing up and both state and non-state actors were playing them against each other to serve their vested interests. In realisation, the journalists’ organisations merge into a single group under the banner of the All Manipur Working Journalists Union to fight the threats unitedly. But still, desperate elements continue to create mischief and bring disunity among the rank and file. On the other hand, some pretenders are trying to take advantage of the explosion of social media and gain legitimacy in the realm of mainstream media. Perhaps, the time has come for members of the mainstream media to put their heads together to team up to this clear and present danger inimical to its very existence. It is not only the threats which is throttling the voice of responsible media, but the traitors within the fraternity which had to be taken care of.