CM Biren said that the government is currently putting in efforts in mission mode to promote Thang-Ta. 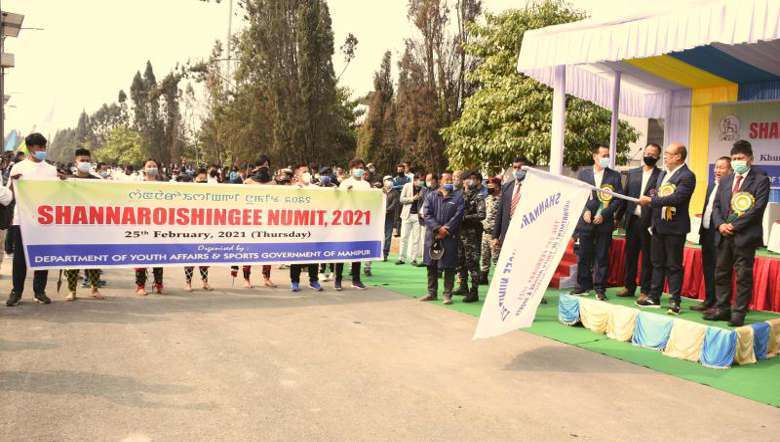 Manipur celebrated Shannaroishingee Numit (Players’ Day) on Thursday in commemoration of the state’s historic win of Raja Bhalendra Singh Trophy of overall team championship in the 5th National Games held in the state in 1999.

The state-level function was held at Khuman Lampak Sports Complex with chief minister, N Biren Singh as chief guest and Youth Affairs and Sports (YAS) minister, Letpao Haokip as functional president. Commissioner of YAS, Bobby Waikhom was also seated on the dais as a guest of honour.

Speaking on the occasion, the chief minister stressed on the importance of playgrounds in moulding budding young players and promoting them up to the international level. As such, people should give up the notion of developing community halls in playgrounds, he observed.

Stating that Manipur is known to the world because of its sporting talents, he said that sports associations and clubs have been taking pivotal roles in producing good sportspersons in the state. Biren also said that the state government already has a policy to provide monetary assistance to the clubs which produce national and international players. He informed that Rs 50 lakh each had been handed over to NEROCA-FC and TRAU-FC which are currently playing in the I-League. He said that the same amount would be given to the girls’ team KRYPHSA-FC as well.

He further said that the government is currently putting in efforts in mission mode to promote Thang-Ta. He informed that 3000 mats have been procured for distribution to various Thang-Ta organisations.

Stating that the state government has been working hard towards development of sports, he said that Khuman Lampak Main Stadium and Hockey Stadium now have flood lighting systems. He also said that all the districts would have hockey astro-turfs apart from developing playgrounds in different villages under the Khelo India scheme. In addition to the existing 5 percent reservation in government employments, prize money for medal winners in Olympics and International championships had also been hiked. He said that Manipur had so far produced 17 Olympians, 19 Arjuna awardees, 26 Asian Games medallists and 30 Commonwealth Games medallists. Moreover, Manipur is the most represented state in the Indian Super League with 43 players, he added.

In his speech, Letpao Haokip said that the government is considering including sports related classes in the syllabus. He also thanked the sports bodies for bringing the youths to the right path and contributing its mite in building up a healthy society. The minister said that it is heartening to see that veterans and retired sports persons usually extend full cooperation every time when the government organises any sports related programme. This spirit should sustain for the development of sports culture in the state, he observed.

The chief minister also flagged off a mass run in connection with the celebration. He also awarded a prize to the maintenance team of Khuman Lampak Sports Complex in recognition of their hard work.