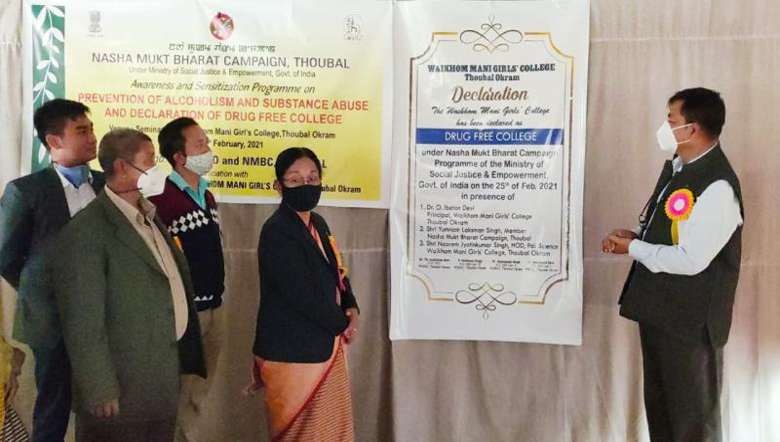 Targeting the adolescent youths and students in the college for primary prevention of drug abuse and alcoholism, an awareness, education and sensitization programme were held at the seminar Hall of Waikhom Mani Girls' College, Thoubal on Thursday.

The DSWO and NMBC Thoubal along with the NCC and 3 NSS Units of Waikhom Mani Girls' College jointly organised the programme in which 78 students and teachers took part.

The efforts made by Nasha Mukt Bharat Campaign programme under the Ministry of Social Justice and Empowerment, Government  of India to make Thoubal district free from intoxicating drugs and alcoholism were pointed out by the NMBC Member Yumnam Laksman Singh.

He said awareness and education alone is not sufficient enough without maintaining a positive attitude of taking a firm decision of not taking the drugs in life. For those who are already a victim of drug addiction, there is a need to send them to the Hospital and Rehabilitation Centres for detoxification, counseling and rehabilitation process, he said. Drug addiction is a treatable disease, he added.

Considering the need of the college and consequent upon the Awareness Campaign, the college principal declared the Waikhom Mani Girls' College as Drug Free College with immediate effect. Further, the NSS Programme Officers of Unit l and ll jointly formed a Students Club to enforce drug prevention activities in the college campus.

Giving the live examples of the ill effects of drug abuse, Naorem Jyotinkumar cautioned the youths and students not to indulge in drug and alcohol abuse in letter and spirit. Later, he administered a Drug Free Pledge in which all participating students and teachers joined hands in the true spirit of avoiding intoxicating drugs of all forms in life.