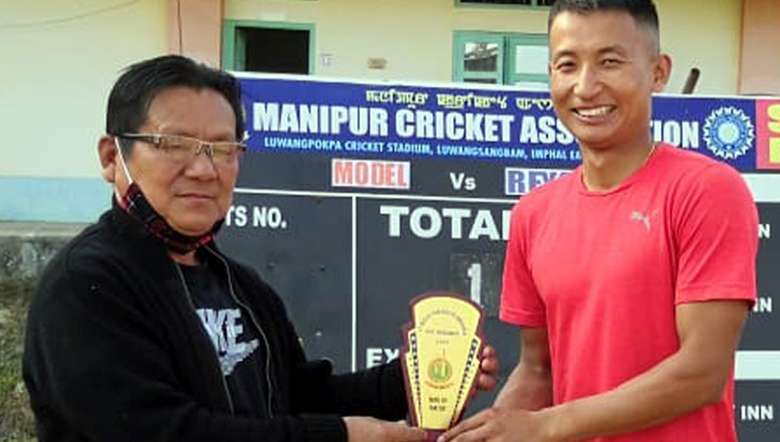 Model Club skipper Karnajit recieving the Man of the Match for his 55 runs knock from MNCA official (PHOTO: IFP)

In the first quarter final, PCC won the toss and decided to bat first where they managed to build up a respectable total of 192 runs for 9 wickets from 40 overs. Tyson made 42 runs from 43 balls while Anand got 37 runs from 32 balls. Dipu with 15 runs and Chingkheihunba with 8 runs remained not out in the innings.

CRAU relatively had an easy chase with Dennis making 42 runs from 60 balls while RK Herachandra got 36 runs from 48 balls to reach the target in 39.3 overs for the loss of 6 wickets. Rakesh and Kala contributed an identical 23 runs.  PCC bowler Jobanta claimed 2 wickets while Anand, Chingkheihunba, Santosh chipped in with 1 wicket each. CRAU batsman Herachandra was declared the Man of the Match for his 36 runs.

In the second quarter-final tomorrow, ESU Wangkhei will take on KSDO.