The seed sowing festival saw the gathering of large crowd in their colourful, traditional attire at their mission ground on Tuesday 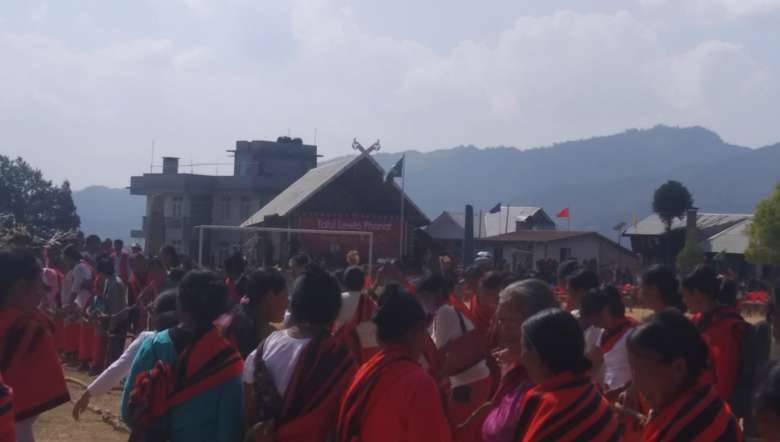 Talui village in west of Ukhrul district celebrated its Lewto phanat - a seed sowing festival which saw the gathering of a large crowd in their colourful, traditional attire at their mission ground on Tuesday.

A tug of war which was taken part by young and old alike was the main highlight of the festival. Besides, other cultural activities included performance of folk dance and folk songs.

The 'dance of livelihood' is performed by a group of dancers, both men and women in equal numbers in full traditional costumes.

Attending as the chief guest, Forest Minister Awangbou Newmai who is also the former president of NPF Manipur unit urged the gathering to love oneself so that peaceful coexistence could be attained among the communities.

Saying that Talui village was the first place he visited after being elected as MLA Chingai assembly constituency, Khashim Vashum said, “There may be some limitations when it comes to schemes and other works, but I find immense joy on seeing my people because NPF is a Naga people's party.”

Taking about the prevailing issues in the Tangkhul community, he urged the gathering to respect gods, anointed customary chiefs and the council members while appealing to the VAs to take care of their villagers so that peace and development is maintained.

Commenting on their mission, convenor jubilee planning committee AC Thotso said that their main aim was to join the global fight against climate change by educating the people about preserving the forest cover and stopping rampant deforestation and degradation of biodiversity.

As part of the green mission, tree saplings were planted in the area.

The green mission was launched in commemoration of ZTKL Platinum Jubilee to be held in 2022.