More than 10 students sustained injuries in a clash with police on Monday. 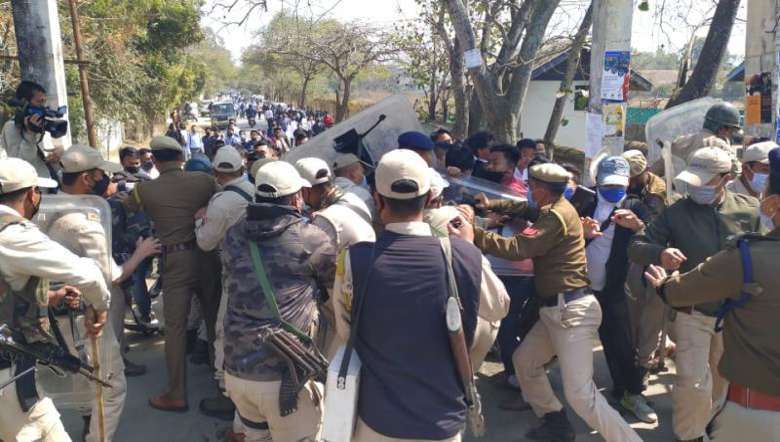 The demand of college students to resume classes in government colleges took a violent turn on Monday as more than 10 students were reportedly injured in a clash with police.

Classes have been brought to a standstill since the government college teachers under the banner of Federation of Government College Teachers Association (FEGOCTA) have resorted to class boycott since February 17, demanding implementation of 7th UGC Pay and Regulations. While teachers under the banner of All Manipur College Teachers Association (AMCTA) are on cease work strike since Monday.

Around 10:30 am, the students of the university took out the rally chanting various slogans to bring normalcy in the academic atmosphere.

The students then headed towards the Manipur Legislative Assembly to mount pressure on the legislators around 11 am. However, police personnel already deployed along the Thangmeiband area intercepted the students at the western gate of DM College of Science wherein a huge confrontation broke out between the two.

In order to disperse the students, police fired around three pepper bombs and the students also retaliated by pelting stones. More police personnel arrived at the scene and around six teargas shells were fired towards the students. Among the student protestors in the Dhanamanjuri campus, it is said that around six sustained injuries in trying to flee from the teargas.

The police also blocked the Thangmeiband-Khuyathong road during the clash thereby causing traffic congestion for several minutes. Nevertheless, the situation was pacified around 2pm.

Speaking to the media on the sidelines of the protest, girls’ common room secretary of DM College of Arts Students’ Union Laimayum Sally said that the government used force to suppress the students whose demand is to let them join classes after months of break due to COVID-19 pandemic.

She urged the government to solve the issue of the teachers’ strike at the earliest for restoring the normal academic atmosphere and demanded the education minister to resign if he is not going to take responsibility.

PG student Naorem James expressed strong condemnations over the treatment of the police towards the students whose demand is to allow them to study.

While mentioning that examinations have been scheduled to be held in April first week, he demanded the authorities concerned to resume classes immediately.

Meanwhile, students of Manipur College also held protests, demanding the resumption of classes. It is said that around eight students were hurt during the protest.

All Manipur Students’ Union (AMSU) has decried the police for using excessive force towards the students and causing injury among many students.

The academic atmosphere in higher education has worsened because of the government's failure to timely intervene in the teachers’ demand, HRD secretary of AMSU Bruce Pebam said while speaking to the media at AMSU office, Dhanamanjuri Campus.

Mentioning that AMSU endorsed the teachers who are demanding their rights, he however, appealed to the agitating teachers to take alternative forms of agitation by considering the plight of the students.

Further mounting pressure on the government to bring a solution immediately, he warned that AMSU will also launch intense forms of agitations if the government turns a blind eye to the demands of the students.

Chief Minister N Biren Singh recently announced on the floor of the House that the issue would be addressed in a few months’ time.

The teachers are also sticking to their stand of intensifying agitations till their demand is fulfilled.