Around 16 teams from various communities across the district took part in the opening event. 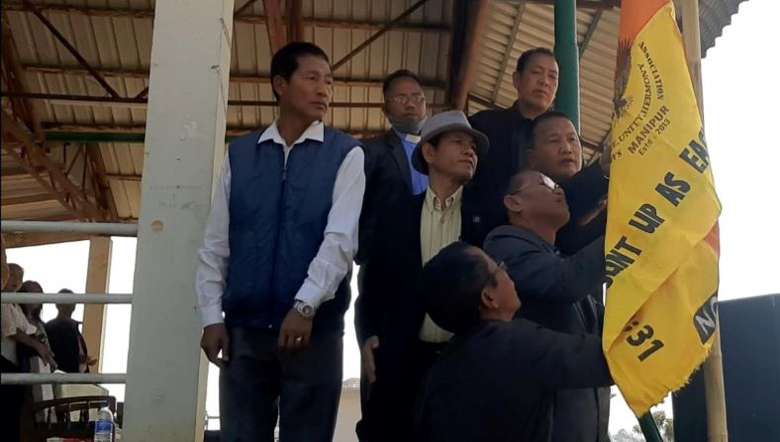 As the Veteran theme was played in the air, Huidrom Vikramjit Singh hoisted the flag of Sadar Hills District Sports Veteran Association Manipur after the invocation prayer was made by secretary Kangpokpi Town Churches fellowship reverend Fr Jangkhogin followed by welcome speech and presentation made by president SHDSVAM Lunthang Haokip.

Huidrom Vikramjit Singh conveyed his greetings to the people of Kangpokpi district while appreciating the initiative of Sadar Hills District Sports Veteran Association Manipur in promoting physical fitness and good health among the veterans through sports.

He said that through collective efforts and struggles, the time has come now to create opportunities for the development of the society while eschewing the attitude of self benefits.

He also promoted the idea of 'Give and Take' among the people while assuring that he will always help with all his available machineries for the development of the district.

Around 16 teams from various communities across the district took part in the event.

The opening match between Liyai Kongpao Liyai Kalapahar (LKLK) Veteran and Twilang Area Veteran was kicked off after inspection of players by dignitaries and opening of the sport meet by kicking in the ball inside the playground by the chief guest.

Twilang Area Veteran started the game with attacking from creating multiple chances to break the opening but the slow and steady play of LKLK Veteran was enough to stop them in finding the opener.

Despite persistent effort and pressure by Twilang Area Veteran, LKLK Veteran striker Khamingkhai Zimik found the opener in the 28th minutes before Simon's goal in the 30th minutes sealing the scoreline 2-0 in the first half.

The second half also went in favour of LKLK Veteran as Khamingkhai Zimik added another brilliant goal in the 47th minutes before Twilang Area Veteran pulled back a goal in the 54th minutes through its striker Thongminlal.

The match ended 3-1 in favour of LKLK Veteran.

The second match witnessed a walkover in favour of Keithelmanbi Veteran as the opponent Tujang Lhang Veteran B Team failed to turn up.