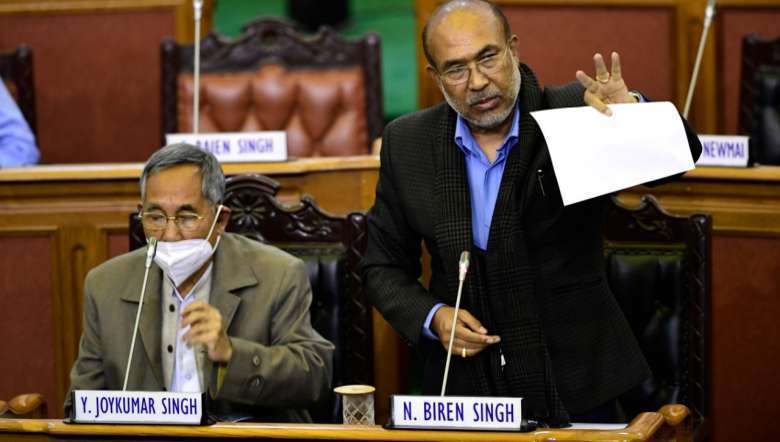 Forty-four officials of the Narcotics and Affairs of Border-Manipur (NAB) have been booked under various sections for insincerity in performing their duties and involving in criminal cases, Chief Minister N Biren Singh said on the last day of the 12th session of the 11th Manipur Legislative Assembly.

Replying to observations given by opposition MLAs on the floor of the House during the consideration of the Manipur Appropriation (No. 2) (Bill no. 11 of 2021), Biren said that following the appointment of SP (Prosecution), over 100 individuals arrested in related drug cases have been convicted by the court.

Also, with the introduction of a state’s policy to combat the drugs issue in the state, the state police have raided three drug laboratories in the state and have been continuously working with full commitment to eradicate drugs from the state, Biren added.

Mentioning the voluntary destruction of poppy plantation in Paoyi (Peh) village by its villagers, Biren said, “such act clearly shows that the state is overcoming the drug issue.”

Many villagers of other villages have also started approaching the state government seeking to provide an alternative for poppy plantation, he said.

To discuss the war against drugs, a meeting has been fixed with leaders of around 35 different tribal communities on February 25, Biren said.

With the support of the public, the state government has high hope that the drug issue can be eradicated from the state within two years, the chief minister added.

Biren also stated that the planning works for the construction of the ring road around Imphal is almost completed and the fund for widening the Imphal-Churachandpur road into double lane has been sanctioned.

Regarding the ‘Go to village’ and ‘Go to Hills’ missions, he said such missions brought back the emotional attachment between brother and sisters of hills and valleys.

Such mission has helped in delivering the central and state government’s sponsor schemes to far flung villages. It has given an old-aged pension scheme to 20,800 individuals and free education to nearly 8,000 dropout students, Biren said.

As a preventive measure from the new COVID-19 strain, he said that the authority of the Imphal Airport has been instructed to conduct COVID testing for passengers coming from Kerala and Maharashtra.

The chief minister said the present government is taking initiatives for the Naga Peace talks to conclude and will continue to make efforts until the peace talk is resolved amicably without affecting any community.

Replying to a question raised by MLA Alfred Kanngam Arthur whether the ceasefire of the Naga Peace talk has been extended to Manipur, the chief minister said that there is no condition to extend the ceasefire in the state. The state government wishes to conclude the decades-old peace talks without affecting any community, he said.

The state had witnessed the incident in which 18 people lost their lives when the words “without territorial limit” were declared. The state government also wishes to conclude the peace talk peacefully, he added.

When asked whether the chief minister is taking any initiative to wind up the peace talk by inviting every community, Biren said that the society has changed much and arrived at a point wherein civil society organisations, public and the government can go jointly.

He further said that Manipur is a state based on unity, integrity and the people are believers of self-respect. The present government regards the people’s opinion and views, he said.

Replying to a query by MLA K Ranjit Singh, Cooperation Minister O Henry said that there is a policy to increase the payscale of cooperative inspectors at par with the inspectors of other departments. The department had asked the authority concerned to amend the recruitment rules of inspector Cooperative Societies, he said. However, the process depends on steps taken up by the department of Personnel and Administrative Reforms (Personnel Division), he added.

Minister of CAF and PD Thokchom Satyabrata said that to address the inconveniences faced by domestic LPG consumers due to the price hike, the government has fixed the price of LPG at the rate directed by the Petroleum and Natural Gas Ministry. The system of providing subsidies is still continuing, he added.

During the 13 days sitting of the Assembly session, the House has passed all 17 bills of the total 17 government bills introduced. A total of 79 starred and 29 unstarred questions were raised by the opposition MLAs and have also moved four calling attention motion.

The House also adopted one private member’s resolution and four committee’s reports presented during the sitting.