COVID-19 Vaccines: How India has fared on vaccination so far

As India completes one month of its vaccination drive, here's how the country's COVID-19 vaccination programme has progressed since its launch. 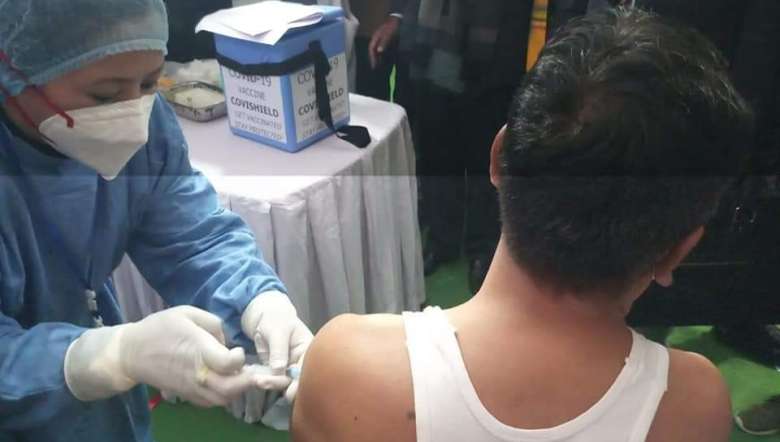 India has administered the COVID-19 vaccine to 8.4 million people in one month since launching the world's largest vaccination programme on January 16. At this rate per month, India is likely to miss its target of vaccinating 250 million people by July.

In the first phase, India began vaccinating health workers with two COVID-19 vaccines--the AstraZeneca-Oxford-developed Covishield manufactured by the Serum Institute in Pune; and the indigenous Covaxin, jointly developed by Bharat Biotech and the Indian Council of Medical Research.

Globally, the most vaccinations have been carried out in the United States (52.8 million), followed by China (40.5 million) and the United Kingdom (15.6 million), with India fourth on the list with 8.4 million having received the jabs by 6 p.m. on February 15.

As India completes one month of its vaccination drive, IndiaSpend looks at the important numbers and data on how the country's COVID-19 vaccination programme has progressed since its launch.

How many have been vaccinated in the first month?

A total of 8.4 million people had received the COVID-19 vaccine till February 15. Of these, only 97,732 have received two doses of the vaccine. The second dose has to be administered 28 days after the first. India began administering the second dose on February 13.

The majority of those vaccinated have been health workers followed by frontline workers.

Looking ahead, India has about 150 days to administer the first dose of the COVID-19 jabs to another 241 million people--and also administer the second dose--to meet its target of 250 million by July. This means India has given the first shot to only 3.4 per cent of its total target group, and 96.6 per cent are to receive both doses in the next five and a half months.

In December 2020, the government announced that the first vaccination priority list has 300 million--10 million health workers, 20 million frontline workers, and 270 million people aged above 50 and those with comorbidities.

However, in his response to a question in the Lok Sabha on February 5, health minister Harsh Vardhan said that only 58 per cent of the government's target for the first two groups, 17.48 million health and frontline workers, had been registered to receive the COVID-19 vaccine so far.

How much money has been allotted for vaccines, vaccinations?

In this year's Union budget, the central government has allotted Rs 35,000 crore ($4.7 billion) for COVID-19 vaccinations. Apart from this, the health ministry has an overall allocation of Rs 73,932 crore ($10.12 billion), of which Rs 360 crore ($49.6 million) is earmarked for vaccinating healthcare workers.

The government has spent Rs 350 crore ($48.2 million) to procure 16.5 million doses of Covishield (11 million) and the indigenious Covaxin (5.5 million) so far. The Centre has already released Rs 123 crore ($16.9 million) to states and Union territories for vaccination and vaccines.

The two vaccines being used in India have both been given special approval, for "restricted use in emergency situation". The approvals were granted even though Covaxin had not yet completed its phase three trials. Covaxin is currently being administered in "clinical trial mode".

As with any vaccine, some of those who receive the vaccine shots might display a physical reaction to the vaccine. The reaction could range from fever and nausea to headache and fatigue. In some cases, the reaction could lead to death even. These are termed "adverse events following immunisation".

An adverse event following immunisation by itself does not automatically mean the person has reacted badly to the vaccine or that the vaccine can cause problems in others too. But all adverse events are supposed to be recorded by those conducting the vaccination programme, and then investigated to see whether the adverse events were linked to the vaccine. The government has developed an Adverse Events Surveillance System to track these events.

Until February 4, 8,483 adverse events had been recorded in India's COVID-19 vaccination programme, data presented in the Rajya Sabha by the government show. Of these, 8,402 had been recorded for Covishield alone.

Of all recorded adverse events, 35 had required hospitalisation, or 0.0004 per cent of total vaccinations given, 28 had died, or 0.0003 per cent of the total, as on February 15, said the government.

The government said that 11 per cent of those vaccinated had not been informed about adverse events following immunisation and that the states need to improve this.

So far, the government has maintained that none of the adverse events were found to be causally linked to the COVID-19 vaccines. Meanwhile, investigations into the more serious adverse events that required hospitalisation or resulted in death are still going on.

By February 1, 21.5 million doses of COVID-19 vaccines had been distributed to states and Union territories. Most of these vaccines were Covishield (88 per cent) and the rest were Covaxin.

The states that have received the most quantities of vaccine doses by February 1 are: Uttar Pradesh, Maharashtra, Karnataka, West Bengal and Rajasthan.

Which countries has India donated or sold vaccines to?

Even before the COVID-19 pandemic, Indian vaccine companies had been manufacturing 40 per cent of the world's vaccines. On average, 2.3 billion doses of vaccines are manufactured in India annually, of which 74 per cent are marked for export, IndiaSpend reported.

Now with the pandemic, millions of vials of COVID-19 vaccines are also being made by Indian companies in India and are being exported around the world. So far, 16.5 million doses of made-in-India COVID-19 vaccines have been commercially sold to other countries. India has also given 6.47 million doses as grants to other countries, said the Ministry of External Affairs.

(This article was first published at IndiaSpend)