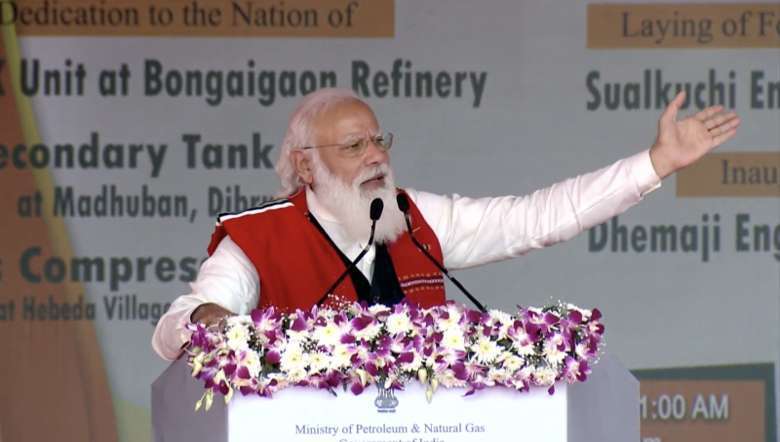 Prime Minister Narendra Modi on Monday inaugurated important oil and gas projects as well as two engineering colleges in Assam. This is PM Modi's third visit to the poll-bound state in a month.

Speaking in a public meeting at Silapathar, PM Modi alleged that the previous government treated the North Bank of Brahmaputra in a step motherly manner despite its immense potential.

"The earlier governments gave the region a step-motherly treatment and did not prioritize the requirements of connectivity, hospitals, institutions of education, industries for this region. Our Government, working on the mantra of 'Sabka Saath, Sabka Vikas and Sabka Vishwas', has overcome this discrimination." the Prime Minister said.

PM Modi added, "Works such as completion of Bogibeel Bridge and broad gauge railway line in North Bank have been done by our government."

The Prime Minister said that till 2014, out of every 100 families, only 55 families had LPG gas connections. In Assam, this number stood at 40 even after a refinery was present in the state, Modi said while adding gas connectivity in Assam today has reached almost 100 per cent with the help of Ujjwala Yojana scheme.

PM Modi further said that Assam's youth has amazing potential and the state government under the leadership of Chief Minister Sarbananda is working hard to increase this capacity. Today there are more than 20 engineering colleges in the state, PM Modi added.

"The Assam Government is trying to implement New Education Policy at the earliest. This will benefit the people of Assam, especially children of tea garden workers, Scheduled Tribes as the medium of education will be local language," the Prime Minister said, adding tea production will strengthen the vision of a self-reliant Assam.