Civil Disobedience Movement, a loosely organised group against the February 1 coup, had called for a general strike on Monday. 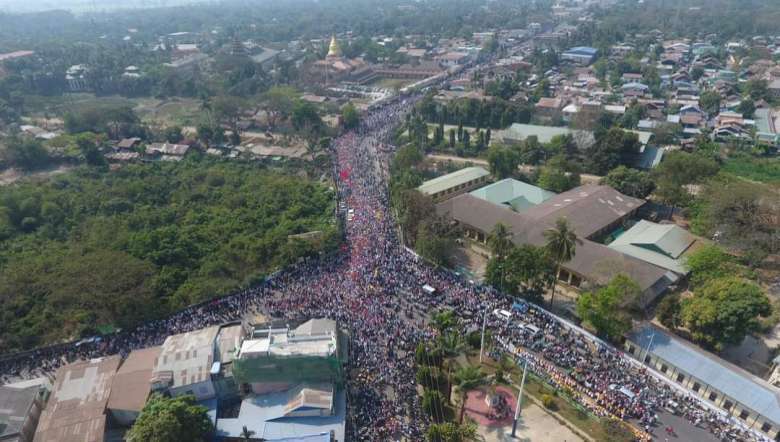 Hundreds and thousands of anti-coup protesters took to the streets across Myanmar on Monday, protesting against the military coup despite a clear threat from the junta that it would again use lethal force against the demonstrators, according to reports.

Civil Disobedience Movement, a loosely organised group against the February 1 coup, had called for a general strike on Monday asking people to gather for the "five twos revolution", a reference to the date, 22/2/2021 to make a "Spring revolution."

As per reports, tens of thousands of protesters assembled in Yangon, Myanmar's biggest city and commercial hub, Naypyidaw, Mandalay and elsewhere, despite the threat from the junta.

Many shops and businesses in Yangon and in other cities were closed on Monday, the reports said.

Yangon witnessed the biggest gathering of people at Hledan Junction on Monday since the February 1 Coup. In Mandalay, protesters were seen raising their hands in a three-finger salute, signaling opposition to the military, the reports said.

Myanmar has been witnessing nationwide demonstrations since the military seized power after alleging fraud in the November elections and detaining de-facto leader Aung San Suu Kyi and President Win Myint in the capital Naypyidaw on February 1.

At least three protesters have been killed in the protests so far. On Saturday, two protesters, including a teenager and a young man, were killed in Mandalay and more than 20 people injured as authorities used live ammunition to disperse demonstrators, the reports added.

Meanwhile, the US reiterated its stand with the people of Myanmar.

"We continue to stand with the people of Burma as they voice their aspirations for peace, democracy, and rule of law. We call on the military to stop violence, release all those unjustly detained, cease attacks on journalists and activists, and respect the will of the people," US State Department spokesperson Ned Price tweeted.

US State Department Secretary Antony Blinken also said on Twitter that the US would take firm action against those who perpetrate violence against the people of Burma.