Three persons arrested with 1.4 lakh World is Yours tablets in Manipur

All the arrested are of Keibung Makha Leikai, Thoubal district. 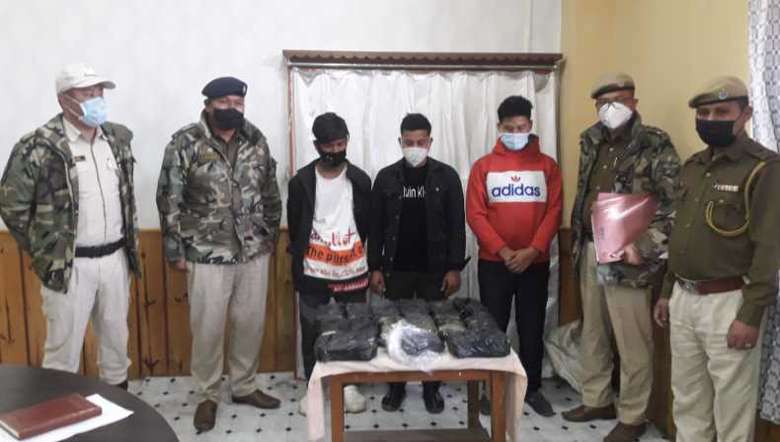 Three persons were arrested and 1.4 lakh World is Yours (WY) tablets seized from two different Tata trucks by a team of Imphal West district commando at Kanglatongbi Santipur in Manipur on Sunday.

The commando made the seizure while they were conducting, risking and checking at Kanglatongbi Santipur under the jurisdiction of Sekmai police station and arrested three occupants of the trucks at about 4 pm on Sunday.

Superintendent of Police, Imphal West, K Meghachandra was speaking to media during a press conference at Babupara, Imphal West this Monday.

The three arrested persons have been identified as one Md Akhan, 24, son of Md Anuwar; Md Yunush alias Achouba, 19, son of Md Dilip and Md Mustakin, 28, son of Md Rahimuddin. All the arrested are of Keibung Makha Leikai, Thoubal district.

The SP said the two trucks bearing registration number AS01DD-5557 and NL01G-8445 were detained during frisking and checking at the area by the said police team led by additional superintendent of police (Ops), Imphal West, Amarjit Lamabam and officer-in-charge, commando, Imphal West, P Achouba under the supervision of SP, Imphal West.

On thorough checking of the Tata truck bearing registration number AS01DD-5557, 10 black packets suspected to be containing 1 lakh WY tablets were found concealed inside the bonnet of the said truck. The team also recovered two mobile phones and one wallet containing Rs 2,400, one RC book and one driving license from the possession of the occupants of the truck.

On further checking of another truck bearing registration number NL01G-8445, another 4 black packets suspected to be containing 40,000 WY tablets were also found from the bonnet of the said truck. The team also recovered one mobile phone, one RC book, one wallet containing Rs 2,800 and one driving license.

Meghachandra further said the three occupants were arrested on the spot and seized the recovered along with the two trucks. On examination the seized tablets were found to be WY tablets. Later the arrestees disclosed that the tablets were given to them by one unknown person sent by Md Itomba of Keibung Makha Leikai presently staying at Guwahati and instructed them to be transported till Guwahati, he added.

He said efforts are being made to arrest the other accused persons. The arrested person along with the seizures have been handed over to Sekmai police station for further necessary legal action, Meghachandra added.