Will the politicians take the lead

IFP Editorial: The massive exercise of the vaccine roll-out had failed to convincingly impress upon the public of the safety concerns. 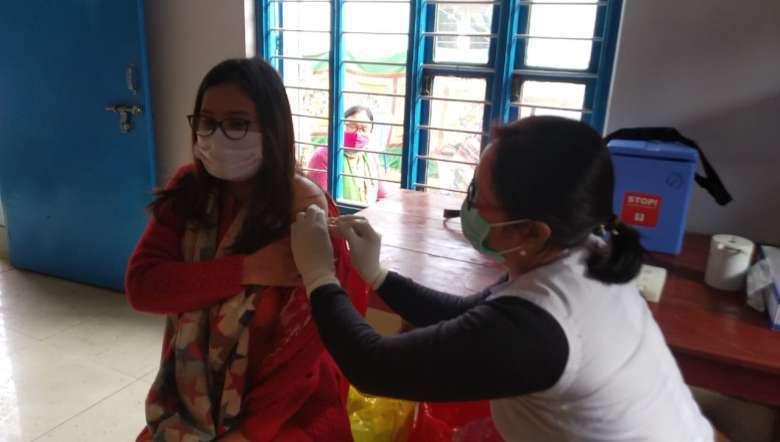 The recent death of an Anganwadi worker in Bishnupur district after getting the Covid-19 vaccine shot has once again brought to the fore the twin issues of efficacy and side effects of the vaccine rolled out by the government. Previous concerns were about the safety and efficacy of one of the vaccines being used - Bharat Biotech’s Covaxin. The drug was cleared for emergency use despite Phase III trials still pending. The government said it was cleared on the basis of Phase I and II trial data. The prime minister urged people not to believe rumours about the vaccine’s efficacy.

Some of our local doctors had protested to vaccination by Covaxin, while they prefer Covishield developed by Oxford University-AstraZeneca which have cleared the required protocols and clinical trials. Barring in the Centrally-run hospitals like the All-India Institute of Medical Sciences, healthcare workers in Delhi were administered Covishield, which is developed by the Oxford University with Pharma major AstraZeneca, and manufactured by the Serum Institute of India. So far, Manipur has been getting the Oxford vaccine and many of us consider ourselves to be lucky. But, the recent incident of the death of the Anganwadi worker has put a brake to the vaccination effort.

The Anganwadi worker Sundari, wife of N Roken of Kumbi Terakhong, had complained of allergy and fever after being administered Covishield vaccine on February 12 at Public Health Centre, Kumbi in Bishnupur district. As her condition worsened, she was admitted to CHC Moirang on Tuesday for treatment. She was again admitted to PHC Kumbi on Wednesday. Due to her deteriorating health, she was brought to Imphal on Friday but admitted to CHC Moirang instead as she was under critical conditions. She was administered oxygen for 20/30 minutes, but it was not effective and she was declared dead.

Following the incident, Chief Minister N Biren Singh on Saturday instructed concerned authority to take strong action against erring officials while advising top health officials to issue strong instructions to concerned officials for ensuring strict compliance of COVID-19 vaccination guidelines. In this connection, the state health society issued an office memorandum on Saturday directing all the CMOs, DFWO, DIOs, MSs of government and private hospitals to enquire about the history of allergies and medications and treatment for other diseases before vaccination.

Ever since the vaccination started, a matter of concern among the frontline Covid workers including health professionals was not only about efficacy or safety of the vaccine but the question of whether it is voluntary or mandatory. One of the chief debates surrounding COVID-19 vaccinations is about whether to make jabs mandatory, in the interest of public health. There were even some who believed that force would be the best way to promote the vaccine. Well, the state government’s new memorandum has made it crystal clear that COVID vaccination is voluntary. While the clarification is much appreciated, it seems contradictory to the initial efforts of the government, both Centre and State, in the push for widespread vaccination.

Prime Minister Narendra Modi had appealed to the people not to be swayed by rumours of the efficacy of the vaccine, while Chief Minister N Biren Singh had warned against negative comments in the social media about the vaccine and had promised legal action. Such utterances had led to a wrong perception among the general public that the government is trying to make it mandatory. So, it was but natural for some people to react otherwise. It is mostly because of lack of homework on the part of the government with regard to social and cultural issues also.

Although the government had earlier undertaken a massive exercise of the vaccine rollout, it was not enough. So, we must all agree that the exercise had failed to convincingly impress upon the public of the safety concerns. Now an interesting question doing the rounds is why the top politicians are not taking the lead in taking the vaccination.

India’s Covid vaccine scenario: Why must we stick to 3 Ws and 3 Cs bronze bullets?

Covid Vaccine- A Light at the end of the tunnel or a tantalizing wait?