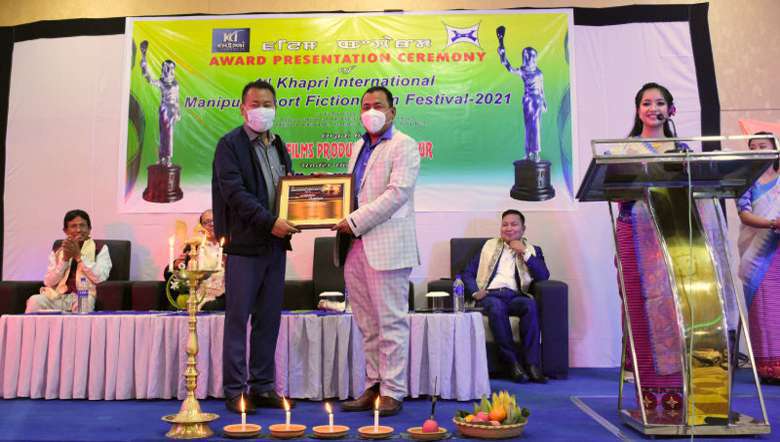 The film revolves around the story of a poor family struggling to survive during the COVID-19 lockdown. The award comprises a certificate, memento and cash of Rs 55,555.

Winners of the festival were announced during the valedictory function of the 15-day first Khapri International Manipuri Short Fiction Film Festival 2021 on Sunday at Meipa Venue, Palace Compound.

‘Thoibee’ and ‘Challenge’ films won the second and third best film awards respectively. A total of 24 films were screened out of which four were selected by the jury for the awards.

Speaking at the occasion as the chief guest, CAF and PD minister Th Satyabrata Singh lauded the organisers of the film festival and the film fraternity of Manipur for moving forward and continuing their contribution amidst the painful episodes of the Covid pandemic.

He said that screening of the four short films on the theme of Covid and lockdown reminded of the dreadful situation the people of the state had to go through by taking shelter in quarantine centres and struggling for food and other necessary amenities during the crisis. “I feel that a good film is one that disseminates a good, moral message to the society,” he added.

Drawing the attention of the organisers, Satyabrata maintained that it will be a good step if more films based on the remedies and precautions to save mankind from the severe Covid virus are made in public interest.

Organising committee member and festival director, Kh Bishwamitra said that the short film movement of Manipur has been going on with a steady pace recently. Over the last few years, Manipuri cinema shows scope for good income and entrepreneurship, he stated.

A catalogue was also released during the award ceremony.