Maheshwar called on youths to be the harbinger of change needed today and not to shy away from politics. 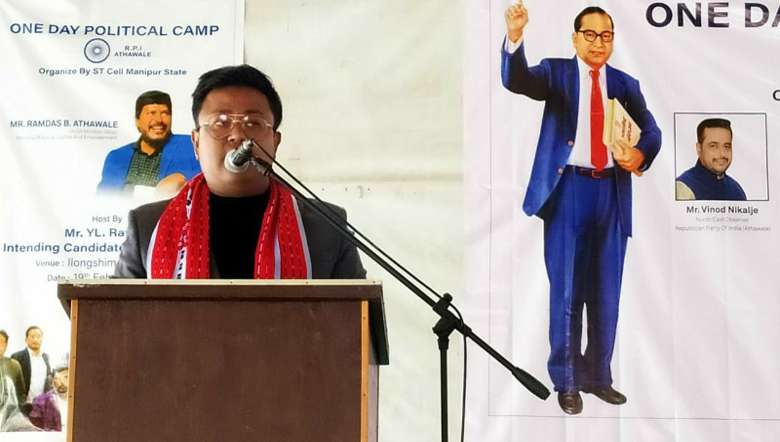 Making a clarion call to the youths brigade to enter politics and deliver what rightfully belongs to the people, Maheshwar Thounajam, President of the Republican Party of India (RPI) exerted that his party’s main mission is to bring to the doors of the people what they can and not indulge in empty vessel political gimmick.

Urging youths to participate in the politics, Maheshwar said youths today are not willing to enter politics terming it a dirty game. However, if one has to change that and improve the condition of our society, youths have to take active part in politics as it is the window to bring the desired change you want to see in your community, he added.

Stating that every party is good but the people within the party are spoiling the system, Maheshwar called on youths to be the harbinger of change needed today and not to shy away from politics. Join the force and cleanse the system, he said.

On asking the public, Maheshwar also learned that they were not receiving the due benefits of old age pensions and widows pension to which he assured that his party will endure to fight to provide what is due to them.

Delivering the welcome address, Ashang Kasar, president RPI ST Cell Manipur said that one party alone cannot solve all the ails facing us today. Our party may be small but we are doing well in parliament. RPI is a grassroot centric party and we will take up projects which no other MLAs have taken up, Kasar said.

He also urged the people to support Ravins saying he is a man of integrity and a man who loves to serve the needy.Our party union minister will be visiting and he is all set to announce big projects during his visit, he said this referring to MP Ravidas Athawale.

Recalling the genesis of Republican Party in the political system of India, Hitesh Deori, president RPI Assam state said RPI was founded in 1956 under the visionary leadership of Dr Ambedkar.

"Ours is a secular party and not a dynasty-based party”, Deori exerted.

Commenting on RPI national president Ramdas Athawale who was also the minister of state for social justice and empowerment, Deori said his door is always open for the needy so that their grievances are redressed.

Appealing the crowd to give their mandate to YL Ravins, he said the party will provide a solar lighting system to Hungpung before election which is one of their most pressing issues in addition to water supply problems.

He said as a doer party they will deliver what they had promised today and will get back to people for the next move.