Killing and threats to Journalist are due to different reasons. The reason arises from the depth of Indian Social and political complexities. 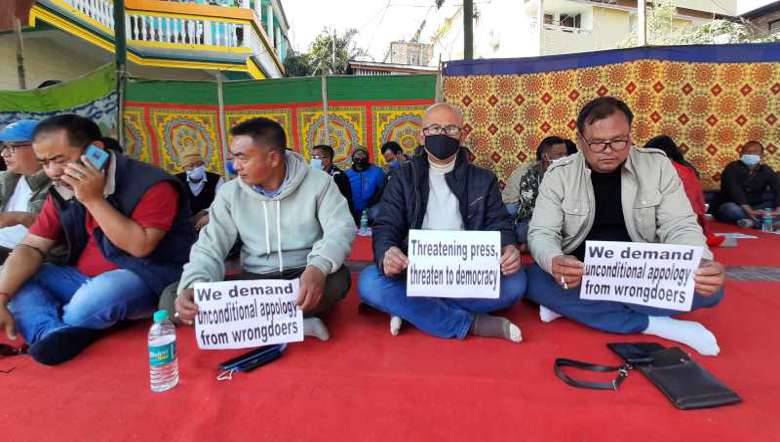 The safety and security of journalists has never been a matter of serious concern for both Indian Academy and media industries. Despite the presence of several journalist associations, serving Journalists deployed in the areas of conflict and crisis across borders (Northeast or Kashmir or North-West across the borders of Pakistan and Afghanistan) repeatedly demanding for the removal of impunity to the military, armed police and special armed constabulary, the government’s apathy continued unabated.

Many take grave risks to expose crime and nexus between the law enforcing agencies and politicians. Geographical locations, class, caste and social network are as significant as job security and backing by the employer. Freelancers’ stringers and those on precarious contract were more at risk and their killers more likely to get away with murder. Ironically, it is these intrepid freelance Journalists’ and stringers who uncover major scams and corruption where corporate-backed media house fear to tread.

The spate of killings of reputed Indian journalist, Gauri Lankesh of Bengaluru, K.J Singh (Punjab), Bhaumik Santanu and Sudip Datta Bhaumik (Tripura) and Rajesh Mishra (Uttar Pradesh) has once again brought to the fore the stark realities of threats hanging over the lives of intrepid Journalists who have evinced a lot of courage to espouse the causes of truth. While these Journalists did not die in cross firing across border of India, they fell to the bullets of mafia that operated in tandem with the local feudalists or capitalists or factionist groups catering to the political clouts in their respective areas of reporting.

The unfortunate assassination of KJ Singh further heightened the magnitude of the crisis as his 92-year-old mother was also eliminated during attempt to assassinate him. Despite all these happening, there is a trepid or lukewarm response both from government and media-house, besides Indian Academy. There is the horrendous fact that every year India is losing not less than 10 to 15 precious lives of Journalists, on average, mostly drawn from the conflict areas such as the North-East or Kashmir or the border areas in North-West, or from the Naxal-infested forest areas of Chhattisgarh, Odisha and Andhra Pradesh. But for playing the requiem in the last-post blare, the journalists who laid down their lives for the honour of the nation or for a greater cause have not received any honours-either from the Government of India or from the agencies they work for.

While the role of the Government of India in neglecting the “Safety & security of Journalists”, covering risk zone has been writ large for over decades since independence, the apathy of the news agencies in the private sector to provide safety and security to working Journalists in risk zone is deplorably apparent. Another interesting dimension to this grossly neglected area is that no media Organization carries out any protest campaign or movement, even if its own Journalists are killed. It is true that the killing of Journalists in India is very high compared with other countries in South-Asia and elsewhere. As rightly observed in the report of International Federation of Journalists in 2016, the Uttar Pradesh is the most dangerous one followed by a number of other states in North-East (Assam, Manipur and Arunachal Pradesh), in the North (Kashmir,Himachal Pradesh and Punjab) and in North-West (Rajasthan).Among south Indian states, Karnataka registered a high incidence of the killing of working Journalists followed by Chhattisgarh, Odisha and Andhra Pradesh.

More than urban-centric Journalists, the rural Journalists stringers and freelancers face more risk to their life when they endeavor to report corruption in higher political circles. According to IFJ report in 2012, about 73 Journalists have been killed since 2005 and 95 Journalists were slain during 1990-2004. According to a report of the Committee to protect Journalists (CPJ) in 2016, ”Getting Away with Murder: 2016 Global Impunity Index” in at least 40% of the cases, the victim reported receiving threats before they were actually killed. Neither the police nor the management of media house has ever taken these matters seriously. This kind of apathy makes it an all the more important case for an imperative study of several dimensions involved in the indispensable “Security and safety of Journalist” reporting on sensitive matters such as crime, corruption and politics.

A report published by the Press Trust of India (PTI) in2014, carried out the news that among 23 Journalists killed in 2013 in South-Asia, 12 were from India alone. The report also indicated the government for not solving the mystery of the killings of the Journalists. The PTI report in 2014, quoting the IFJ report of 2012, said that most disturbing development is the increasingly targeted nature of violence in both Pakistan and India. The report of PTI in 2015 and 2016 also said that most of the murders of Journalists remained mysterious and unsolved. Actually, in many cases, the trial of the accused did not even take off. The latest report of CPJ said that about 11 Journalists identified as working on corruption and politics were killed in the last 10 years and their murder mystery is not yet resolved by the police. It means that they were perfectly planned murders destined to escape from the long arms of law.

The CPJ report (2015) published in “The Hoot” portal under the title “Getting Away with Murder”, has stated that India’s impunity index rating is 0.08 making India’s presence among the countries known for killing Journalist with impunity for eight successive years in a row. In 2017, the IFJ demanded that the Central Government should bring in a law that ensures the security and protection of the working Journalists and freelancers operating in Maoist or extremist infested areas such as North-East, Central and South India, as reported by PTI in2016. It is also demanded the Government to bring in an insurance scheme of not less than 100 million rupees for scribes so that their families do not suffer economically if something unfortunate befalls on their families.

A report by Freedom House in 2016 said that with the expansion of freedom and democracy around the world, the freedom of press touched its lowest point in last 12 years owing to political criminals and terrorist forces seeking to co-opt or silence the media in their struggle for power. The report further analyzed that heightened partisanship and polarization in a country’s media environment and the degree of extra-legal intimidation and physical violence against Journalists. Reporters Sans Frontiers in its report held the view that mafia and cartels began to pose the biggest threat to media freedom worldwide.

In the case of Northeast India, the media was caught between various militant outfits as well as police or military. The Manipur press also confronts a similar threatening situation. On the one side, the media personnel get threats of killing from different militant outfits and on the other side, the police and the military threaten media of dire consequences including threats of encounter. There are twin reasons for this: first the militants’ outfits wage war with the state of Manipur and Government of India and second, they enter into conflicts with other militant outfits to gain upper hand in the region. As a result, they send different notices of threats and blockades to media for publication. If media publish one outfit’s notice, it will invite the wrath of rival militant’s outfits.

Against the backdrop, the media associations have promulgated a code of conduct for all its media personnel on June 19, 2005, which is still in force. Besides this, Journalists in Manipur also got threats from the coteries of high profile and powerful politicians for exposing their loopholes and wrong doing to the public. One such a case was reported that the editor of a leading English evening daily was questioned by two close associates of a heavy weight politician of Manipur for allegedly reporting misappropriation of MP Local Area Development (MPLAD) fund on June 30, 2019. In another case, one Manipuri journalist was also booked under NSA on the ground that he used derogatory words in social media against CM of Manipur and PM of India.

A journalist in western Uttar Pradesh’s Shamli was beaten up on camera by a group of GRP, personnel led by SHO Rakesh Kumar in the night of Tuesday the 11th June 2019 when he went to cover a train derailment. He was forced to strip, thrashed and even urinated in his mouth. In another incident, Mitali Chandola, a female journalist was shot at in east Delhi’s Vasundhara Enclave by some masked men inside the car and threw eggs before speeding away. She was then admitted to hospital. On January 17, 2021, editor-in-chief and the executive editor of a local (Manipur’s) web portal were arrested for the publication of an article based on an FIR under Unlawful Atrocities(prevention) Act (UAPA) and Section 124A (sedition) of the IPC by Singjamei Police.

On January 29, 2021, the Editors Guild of India condemned the “intimidating manner” in which the police of Uttar Pradesh and Madhya Pradesh have registered cases against journalists and editors for reporting the violence during a tractor rally protest by farmers in Delhi on 26th January 2021. The FIR was filed against, India Today journalist Rajdeep Sardesai, National Herald’s senior consulting editor Mirnal Pande, Quami Awaz editor, Zafar Agha, The Caravan magazine’s editor and founder Paresh Nath, The Caravan’s editor Anant Nath and its executive editor Vinod K Jose. On Saturday, February 13, the office of a leading Manipuri local daily “Poknapham” was attacked by hand grenade by an unknown woman for the reason unknown to the said media house.

Killing and threats to Journalist are due to different reasons. The reason arises from the depth of Indian Social and political complexities. Government needs to enforce a law for safety and security of the Journalists so that what is called 4th pillar of democracy (Journalism) can work proactively for good Governance and welfare of our people.