Expressing solidarity with FEGOCTA, teacher associations of different colleges across the state staged sit-in protests at their respective colleges on Friday. 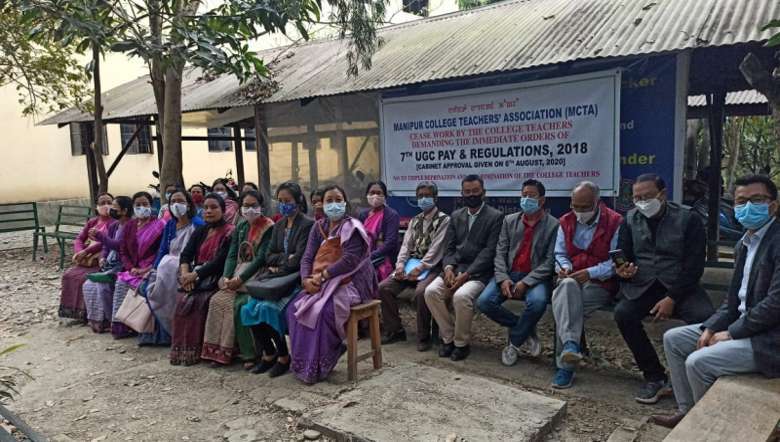 College teachers in Manipur under the banner of Federation of Government College Teachers’ Associations (FEGOCTA) boycotted classes, academic and administration activities of all the government colleges of Manipur since Thursday.

The FEGOCTA intensified the agitation, following the state government’s alleged failure to implement the UGC 7th Pay and Regulations, 2018 for college teachers, despite several ultimatums and memorandums served to the state government by the federation.

Expressing solidarity with FEGOCTA, teacher associations of different colleges across the state staged sit-in protests at their respective colleges on Friday.

The step was taken after FEGOCTA did not receive any positive response from the government even after 16 days of the sit-in protests taken up in different colleges across the state, vice-president of FEGOCTA K Sanaton said while speaking to the media.

It is unfortunate that even after six months of cabinet approval on August 6, no order has been issued for the implementation of the pay scale, he said.

It clearly shows that the government has discriminated against college teachers of Manipur as the 7th Pay has been implemented for all other government employees of the state and college teachers in other states of India, the FEGOCTA vice-president said.

Asserting that the only solution to stop the cease work strike is to implement the 7th Pay scale, he said, “The restoring of normal academic life in government colleges is completely at the hands of the government.”