The minister made the remark during the observation of ‘CAU Farmers' Field Day’ held at Poiroupat Andro, Imphal East on Saturday. 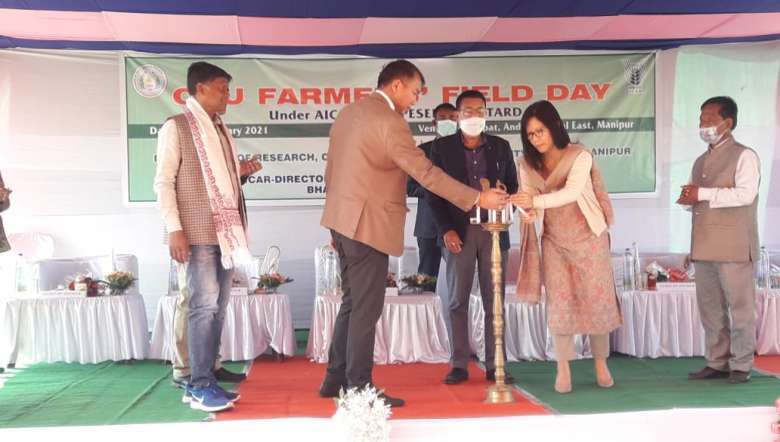 Manipur Fisheries Minister Sorokhaibam Rajen on Saturday said that agricultural lands should not be neglected after harvesting paddy to make the state self-reliant in crop production.

The minister made the remark during the observation of ‘CAU Farmers' Field Day’ held at Poiroupat Andro, Imphal East on Saturday, organised by Directorate of Research, CAU, Imphal.

The minister said that the central government led by Prime Minister Narendra Modi has taken up several schemes for the betterment of farmers in the country like Pradhan Mantri Kisan Sammann Nidhi in which all farmers will get up to Rs 6,000 per year as minimum income support. The state government had also taken up various initiatives for the welfare of the farmers.

Asserting that water scarcity is the most common factor for reducing crop productivity, boring of tube wells under the Minor Irrigation Department, Government of Manipur, is on the card, the minister added.

Addressing at the event which was organised under All India Co-ordinated Research Project (AICRP) on Rapeseed Mustard under the sponsorship of ICAR-Directorate of Rapeseed Mustard Research, Bharatpur, Rajasthan, director of Research, CAU, Imphal, S Basanta said that agriculture in the state, being rain fed, water is the main limiting resource for crop production during Rabi season. Besides moisture stress, the farmers during kharif season usually grow long duration local varieties of paddy like glutinous rice and remain in the field till November to the first fortnight of December, he added.

Late harvest of the paddy crop leaves a narrow window for planting of Rabi crops and this has compelled majority of the farmers to leave their fields unploughed till the onset of the monsoon, he pointed out.

The director continued that occasionally in isolated pockets of the state, rice-mustard based cropping system has been practised by the local people since time immemorial. Majority of the farmers are small and marginal, thus producing the crop at subsistence level. Besides, the productivity of the mustard crop is very low which is basically due to the use of traditionally available landraces and moisture stress during Rabi season after the paddy harvest.

Saying that identifying and understanding the principle constraints for rapeseed-mustard cultivation in the rice fallow during Rabi season, he opined that the practice of zero tillage cultivation in large scale needs to be popularised among the farmers of the state.

“Though the concept of zero tillage cultivation of rapeseed-mustard is not a new practice in the state, refinement of the cultivation practices is required which includes identifying adequate residual soil moisture for sowing of crop, maintaining optimum plant population, optimum time of sowing, application of nutrients and pesticides and scheduling life-saving irrigation in case of availability of irrigation facility. Moreover, rapeseed-mustard are grown basically for oilseed and recognising the specific location for recommended varieties is a prerequisite for obtaining high yield,” Basanta advised.

In rapeseed-mustard cultivation, inclusion of bee rearing at 3-4 bee colonies per hectare contributes 4 percent increase in oil content and 20 percent higher yield of the crop, he added.

At Andro Poiroupat, CAU Imphal, by  joining hands with the local farmers have sown rapeseed mustard at an area covered around 340 hectares, and the mission is successful, he informed.

A booklet entitled ‘Zero Tillage Cultivation of Rapeseed Mustard in Rice Fallow - A Sustainable Way to Increase Crop Productivity’ was also released by the chief guest.

More than 200 farmers from different places of the state attended the event. An interaction session between the farmers and scientists was also conducted.