College teachers under FEGOCTA have been conducting sit-in protests in different government colleges of the state for 12 days since January 28. 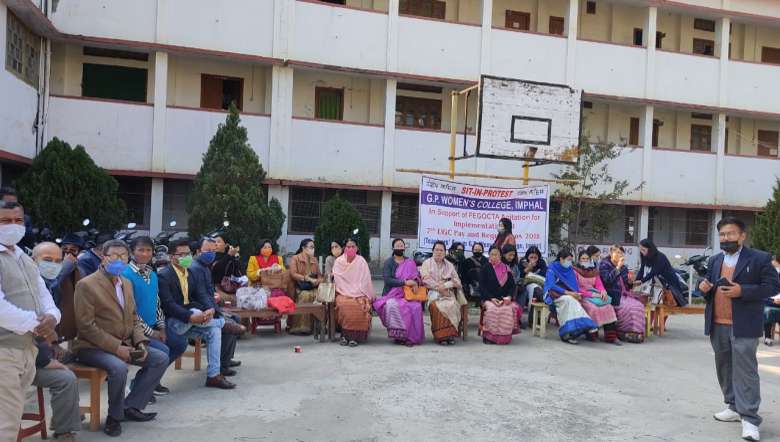 Over 800 college teachers have been holding sit-in protests at government colleges across Manipur (PHOTO: IFP)

Students in Manipur, who have been facing the brunt of the impact of COVID-19 pandemic on normal life, are faced with yet another period of uncertainty. Barely two weeks since normal classes resumed, college students in the state are a worried lot, as hundreds of college teachers in the state have intensified their ongoing agitations, demanding implementation of UGC 7th Pay.

Over 800 college teachers have been holding sit-in protests at government colleges in different parts of the state. Following the protest, Chief Minister Biren Singh announced that the issue would be addressed in a few months’ time. But the teachers said they would intensify the agitation till their demand is met.

The unrelenting demand and intensified protests by the college teachers have thrown normal life out of gear in college campuses. No classes were conducted for two days in most of the government colleges across Manipur as the teachers were on two-day mass casual leave since Friday.

Expressing support to the demand for UGC 7th Pay and the agitation organised by the Federation of Government College Teachers’ Association, Manipur (FEGOCTA), the protesting college teachers went on leave on Friday-Saturday.

FEGOCTA announced two-day mass casual leave from Friday following the failure of the state government to fulfil their demand for implementation of the UGC 7th Pay and Regulation, 2018 for government college teachers in Manipur.

In view of the mass casual leave announced by the college teachers, the number of students who turned up in their respective colleges were low on Saturday.

“As all the students are aware that classes will not be conducted following the protest and the mass casual leave by the teachers, most of the students did not turn up,” said a student of DM College while speaking to this Imphal Free Press reporter.

It was only a few days ago that college students wore a cheerful look as colleges began to resume normal classes after a long break amid the COVID-19 pandemic. Colleges and all educational institutions were closed for normal classes since the pandemic hit the state and the government announced lockdown. The lockdown period was extended for a long period as the viral infection spread to all parts of the state and the number of infected cases grew.

As the pandemic situation became more controlled in recent months, following the state government order, all colleges and schools reopened in the new year on January 27.

But the agitation by college teachers has cut the joy of the students who recently expressed their excitement to go back to college in an interaction with the Imphal Free Press.

“Disturbance in the academic atmosphere after a big break of around one year due to the COVID-19 pandemic has caused apprehension among the students that their studies and careers may be adversely affected,” the student said.

Expressing deep concern over their future, several students appealed to both the teacher community and the government to bring an amicable solution at the earliest for resumption of normalcy in academic atmosphere of colleges.

Principal of a government college on condition of anonymity told the Imphal Free Press, “As the step of taking casual leave is a collective movement of the teacher community and the demand is genuine, I morally support the teachers’ demand.”

“As teachers have taken casual leave as a part of the protest, demanding revision in pay scale, disciplinary action cannot be taken against those teachers for not conducting classes,” he added.

The principal suggested the government that fulfilling the demands of the college teachers who are running out of patience, might be the only way to bring back smooth functioning of government colleges.

The teachers are compelled to carry out the current agitations following the government’s failure to implement the cabinet approval of UGC Policy taken six months ago, said FEGOCTA general secretary N Somorendro.

FEGOCTA demands and agitations were raised and discussed in the ongoing budget session of Manipur Legislative Assembly. But till today there is no invitation from the government to discuss the issue, Somorendro said.

The association said the teachers would boycott classes from February 17 for an indefinite period if the state government fails to pass the order for UGC 7th Pay by February 16.

“Implementing the enhanced pay scale will be the only option to end the FEGOCTA’s movement,” the protesters said.

As a part of the agitation, the college teachers under FEGOCTA have been conducting sit-in protests in different government colleges of the state for 12 days since January 28.