Negligence by concerned authority and carelessness on the part of the public over the years has turned the RDS High School campus in the heart of capital city Imphal into an open garbage dump. 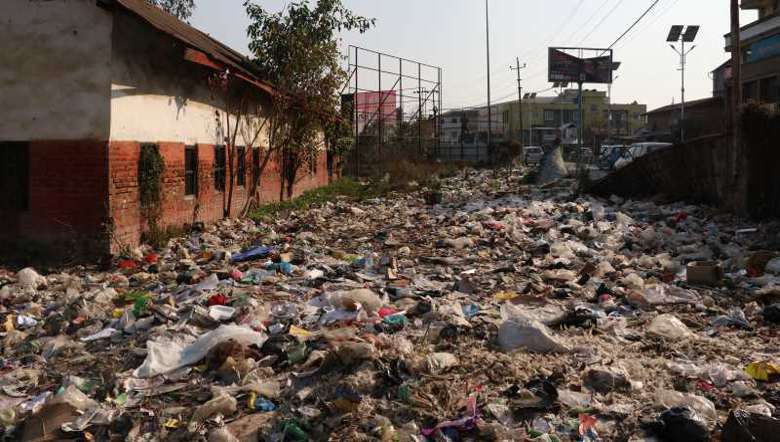 Raja Dumbra Singh High School popularly known as RDS High School that once stood tall among educational institutions of Manipur is slowly fading away from the people’s memories as can be seen from the pile of garbage spreading over more than 100 ft in the erstwhile school campus in the heart of Imphal city.

Negligence by concerned authority over waste management and carelessness on the part of the public over the years has turned the campus into an open garbage dump in present state Municipal Administration Housing and Urban Development (MAHUD) Minister Okram Henry’s assembly constituency.

Besides, the erstwhile school campus, now with no fencing or wall on the western side allowing easy entry and exit, is becoming a favourite haunt for many drug users in the city and people indulging in other illicit activities.

Assistant Sub Inspector L Kesho of Imphal East Police reserve line, posted on duty in front of the RDS High School complex, told the Imphal Free Press that they have come across many people indulging in "illicit sexual acts and drugs" inside the campus.

“Some of them we apprehended and handed over to their families while some ran away. It is the old ruined classrooms and toilets that are being mainly used by the drug users,” he said.

Used syringes, drips, alcohol bottles among others were also seen when this reporter visited the school campus.

Kesho further stated that it is nearly an impossible task to keep vigil of such "unwanted acts" round the clock as there is no wall or fencing along the western stretch of the campus. He also appealed to the authority concerned to look into the matter to prevent the illicit activities. 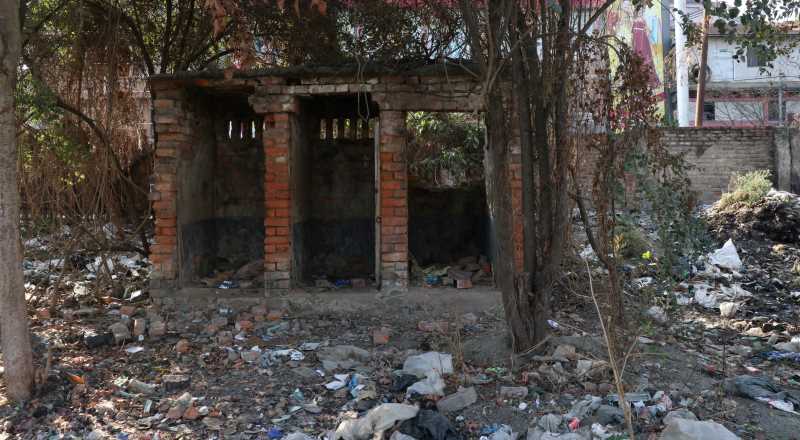 Raja Dumbra Singh High School was established in Imphal in 1951 but it became a full-fledged school around 1956. The school, named after the land donor that is Raja Dumbra, in Purana Rajbari (old palace) area in Imphal East, initially started as a private institution. Later on the school came to be recognised as an aided institution. Subsequently, it was taken over by the state government as a government school and its administration transferred to the state government in 1976.

However, the school was abolished on April 21, 2010, as per the state government policy. Interestingly, the then government planned to set up a commercial centre at the school space, which is approximately 300x200 square ft.

As Raja Dumbra and his family donated the land for educational purposes, Raja Dumbra Memorial Trust was unhappy with the government’s plan and took to the court. The Civil Judge (Senior Division) No. II, Manipur on August 3, 2012, had restrained the state government from causing further demolition of the school building and making any further construction on the suit land except for educational purposes.

The Planning and Development Authority challenged the above judgment and preferred an appeal before the District Judge, Manipur East in 2014. The appeal was dismissed and the Planning and Development Authority filed a revision petition before the High Court of Manipur which the latter also dismissed, saying that there is no merit in the revision. Subsequently, the plan to set up a commercial centre was foundered and the school campus has remained neglected since.

Speaking exclusively to the Imphal Free Press, executive member of Raja Dumbra Memorial Trust, RK Bhupendra lamented that people started dumping wastes inside the campus after the government dismantled the western wall of the campus to facilitate water flow towards the east when the whole of New Checkon and surrounding areas were inundated for weeks with the deluge in 2017-18.

“We are not able to look after the campus now. The then Wangkhei assembly constituency Member of Legislative Assembly and minister Y Erabot had plans to set up a shopping mall, which we do not want. We want the space to be utilised exclusively for educational or skill development purposes,” stated Bhupendra, who is also the last grandson of Raja Dumbra.

A few years ago, officials of Bazar India mart located opposite the campus on the western side had also approached the family to develop the space for parking purposes for the mart.

"We denied as we wanted the space to be utilised for the purpose it is meant to be," the grandson said.

Bhupendra maintained that the trust and descendents of Raja Dumbra will consider allowing usage of the RDS land only if it is for educational purposes.

When asked about the campus becoming an open garbage dump, Bhupendra said that he had already approached the MAHUD Minister Okram Henry around two-three months ago over the matter.

However, there has been no follow up action so far, he lamented and drew the attention of the state government to the careless disposal of wastes, which is becoming an eyesore to passers-by.

Meanwhile, it is becoming a regular sight where people come carrying garbage in their vehicles and dispose them of in the said area thereby causing serious inconveniences to passers-by.  The long strecth of garbage piling up is also posing threats of various health hazards to the people risiding nearby and the unchecked cattles that are often seen feeding on the garbage.

Door-to-door waste collection was introduced by the Imphal Municipal Corporation (IMC) and NGOs under it. But despite the measures taken, it is apparent that many are not willing to subscribe to the service with minimal fees.

In this regard, president of Pureiromba Ima Keithel Nupi Seva Committee Nomita Soram pointed out, “There have been various instances where people came carying garbage in their vehicles and dumped the wastes in the market complex also. We even keep vigil to teach such people a lesson and when we catch them, they were made to pick up the garbage they threw.”

As for the vendors and shops in the market area, all subscribe to the waste collection service under the committee, the committee president said.

Apart from the careless disposal of wates and growing pile of garbage posing health hazards to the locals, considering all the illicit activities carried out in the said space, there is a pressing need for government action. There is an urgent need for proper utilisation of the space that has historical significance to the state.

Otherwise, the school that once groomed various personalities like the first Sahitya Akademi Award winner from Manipur Loitongbam Pacha Meetei and even produced first position holder in matriculation may be depreciated to just another haven of various illicit activities. Delayed action would only add to the woes of people and the place.