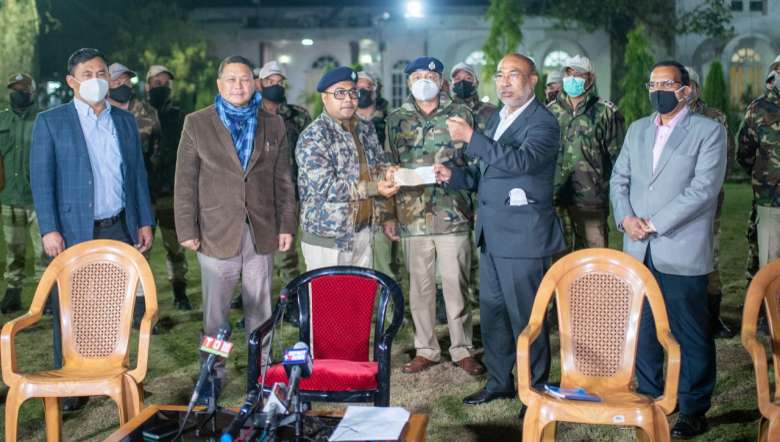 A team of district commando, Imphal East was on Friday rewarded Rs 10 lakh by the chief minister at his office secretariat located at Babupara, Imphal for rescuing three abducted individuals from the hands of suspected Kuki militants. The three persons were rescued on Thursday from a spot in Kangpokpi district where the commando team got into a gun battle with the suspected militants.

Police reported that they received information on Thursday at about 11.30 am that three construction workers had been kidnapped by some armed miscreants suspected to be Kuki militants on Sunday.

They have been engaged in the construction of a bridge at Leikhong near Nongpok Keithelmanbi under Thoubal Dam police station in Thoubal district.

As the police pushed forward, the armed militants fled by taking the advantage of the dense forest, leaving behind the three persons who were rescued by the police team.

On verification, the rescued persons said that they were abducted by the armed militants in connection with monetary demands.

One AK-56 rifle along with some empty cases was seized from the hideout area suspected to be used by the armed militants.

Speaking to the media, Biren said a commendation award will be given for each police personnel who were involved during the rescue.

By the exceptional courage shown by the district commandos, the three kidnapped persons were rescued, he said. “The state government will never compromise against any enemy or terrorist and will be a friend for the public,” he said. The government is on the hunt for the suspected  militants and they will be booked immediately, Biren said.