As a part of the occasion, the children watched short documentaries on the subject and prepared a slogan ‘We are not a Shield, Not a Spy; Don’t Steal our Future', among others. 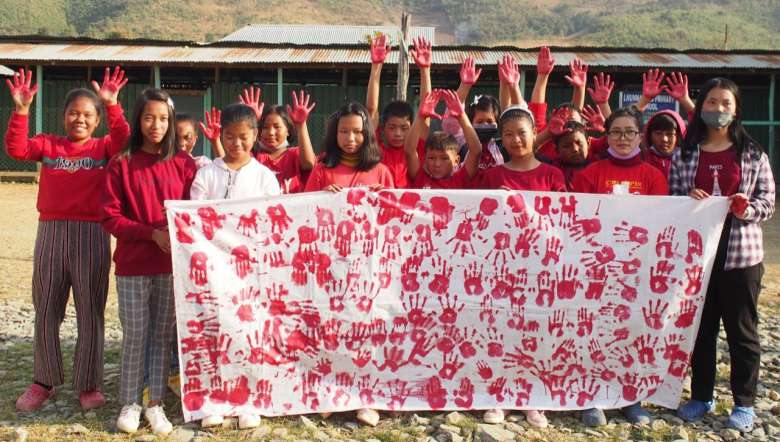 The Centre for Women and Girls (CWG) on Friday observed the International Day against the Use of Child Soldiers or Red Hand Day at Cornerstone Academy, Lhunnajang village in Pallel under Tengnoupal district.

Close to a hundred children gathered at the Cornerstone Academy, Lhunnajang for the event, which was supported by Terres des Hommes, Germany. CWG Secretary Hechin Haokip delivered a speech about the significance of the day and the extent of the problem.

She spoke about the ways in which children are vulnerable to recruitment, how this issue affects both boys and girls and the various roles assumed by child soldiers as cooks and cleaners as well as messengers and spies. She spoke of how once a war gets over, child soldiers face difficulties in reintegrating with the communities from which they face alienation from.

She urged the children to express their solidarity toward child soldiers around the world.

As a part of the occasion, the children watched short documentaries on the subject and prepared a slogan ‘We are not a Shield, Not a Cook, Not a Bomber, Not a Spy; Don’t Steal our Future; Children, Not Soldiers.’

Finally, as is custom on Red Hand Day, they dipped their hands in red paint and imprinted them on a piece of cloth.

Since 2002, events have been organised on this day around the world to draw attention to the issue concerning the use of children by state and non-state armed groups.