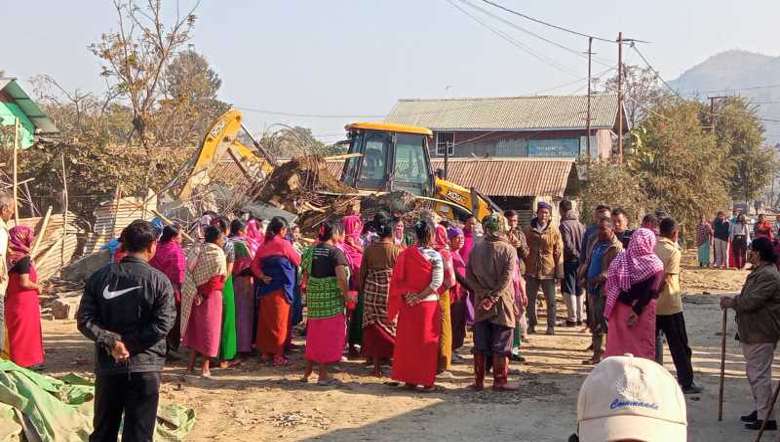 The building of one local club that was reportedly constructed on state owned land was dismantled at Moirang Kampu Sajeb, Imphal East under the instruction of district administration, Imphal East on Thursday, drawing condemnations from the locals.

According to an official order issued by the district administration, Imphal East, the local club, Chingkhei Development Organisation (CDO), Moirang Kampu Sajeb, Imphal East was constructed at a state owned land, and construction on state land is not permissible for public.

Speaking to the media, a local meira paibi named as Y Muhila told that the building was constructed after collecting money from the wages received from MGNREGS. She condemned the demolishing of the club by using force. State land is for the public and there are many structures constructed on state land, she said. The local MLA is involved in demolition of the local club, she alleged while announcing that the MLA will be socially boycotted in Moirang Kampu Sajeb area.

Meanwhile, officer-in-charge, Porompat police station, Binodkumar told the media that the local club, Moirang Kampu Sajeb Awang Leikai was constructed on state owned land. Therefore, under the instruction of SDO, Sawombung, Imphal East T Millikan, the demolition work was carried out and the police personnel are only assisting the officials to avoid unwanted incidents.

Tensions ran high among the locals and police personnel but the demolition work was completed under the security of Porompat police station.