MPCC leaders and members had submitted the statement of disqualification to the governor. 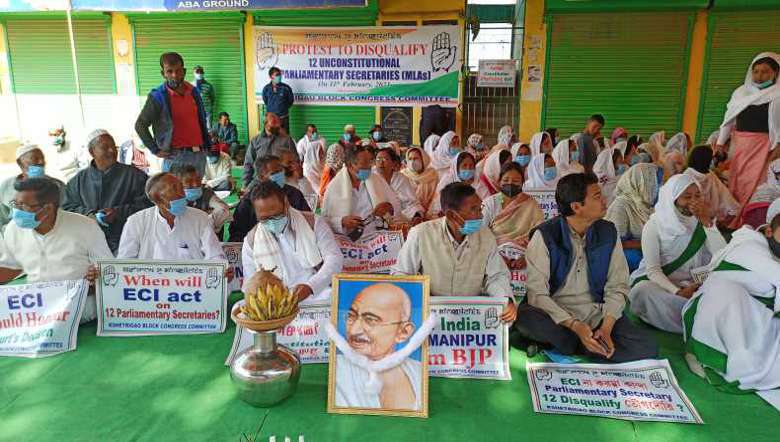 The silent protest is held in demand for disqualification of 12 ruling MLAs who were appointed as parliamentary secretaries by the BJP Government, former MLA Amin Shah of Kshetrigao assembly constituency said while speaking to the media.

Concerning the court case of Surjakumar Okram, DD Thaisi and others as petitioners versus 12 MLAs and others as respondents, the judgment and order of the Division Bench of the High Court on September 21, 2020 pronounced that both mentioned acts are invalid and unconstitutional, he mentioned.

MPCC leaders and members had already submitted the statement of disqualification to the governor but no action has been taken yet. Therefore, MPCC took the initiative to hold protests, demanding disqualification of 12 parliamentary secretaries.

If no further response comes than strong protest and agitation will follow, he added.
Convenor of Kshetrigao Block Congress Committee M Biren said to the media that the High Court had already vindicated the illegal and unconstitutional acts committed by the BJP Government in Manipur.

Governor of Manipur has knowledge about the issue though no action for disqualification has been carried out, he said. The sit in protest will continue at different districts until the 12 parliamentary secretaries are disqualified.