N Biren Singh said that those contractual staff will be given special consideration and the first priority in any recruitment process taken up by the Health department in the future. 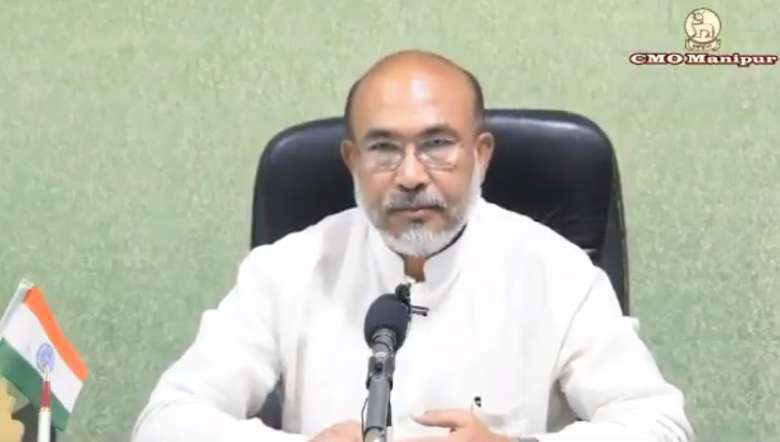 Manipur Chief Minister N Biren on Wednesday said the state government does not have any plan to extend the daily wages service engagement of the health workers who were engaged on contract basis for combating the COVID-19 pandemic.

Biren was replying to a question raised by MLA Ak Mirabai on Wednesday during the 12th Session of the Manipur Legislative Assembly regarding the demands and agitation taken up by the COVID-19 contractual health workers.

Biren said that those contractual staff will be given special consideration and the first priority in any recruitment process taken up by the Health department in the future.

Demanding service extension on a pure contractual basis, the contractual health workers staged a sit-in protest and took up rally on February 2 and the next day they tried to storm at the chief minister’s bungalow.

According to the chief minister, the state government had recruited a total of 659 health workers including 86 medical officers,  306 staff nurses and 264 multitasking staff on contract basis for three months during the COVID-19 pandemic.

Their contract was extended for three more months to continue supplementing the regular staff who were working at Covid care centres, quarantine centres and testing centres. Following the overcoming of the COVID-19, the work contract ended after six months, said Biren.

In reply to another starred question raised by MLA K Meghachandra regarding the movement of inclusion of Meetei/Meitei in the scheduled tribe list, Biren said that the state government has taken up the matter to the central leaders through dialogue.

“I do admit that the Meetei/Meitei community need protection,” stating that he said as the matter of inclusion of Meetei/Meitei is an anomalous demand, it needed more time for discussing the detail and thorough examination with input from the experts.

The state government has taken up a programme to make the state self-sufficient in fruit and vegetables as a part of the “Vocal for Locals” mission, said the chief minister while replying to another starred question raised by MLA Surjakumar Okram regarding the programme of self sufficient of fruits and vegetables.

Under the centrally sponsored scheme, Mission for Integrated Development of Horticulture, the coverage of area for vegetables in the state in 2019-20 was 1412 hectares and during 2020-21 it has increased to 2970 hectares, he said.

Moreover a corpus fund of Rs. 300 lakh has been created for avoiding distress sale of high perishable horticulture products under the state fund scheme “Market Intervention Scheme,” he added.

Regarding the MSP fixation, it will be done by the Centre under APMC Act which is under consideration in the Parliament session. Following the price fixed by the Centre the state government can adjust the local price, said Biren.

Labour and Employment Minister Th Satyabrata said that the state government has not taken up any assessment regarding the job loss for the migrant workers that returned from other states due to COVID-19 crisis. The minister was replying to a starred question raised by MLA Surjakumar Okram.

However the state government will discuss taking up necessary steps to give assessment to the migrant workers that return from other states during the lockdown period.

Satyabrata said according to the date available to the state government the total number of migrant workers returning to the state during lockdown is 15,945.

Following a starred question raised by MLA Ak Mirabai regarding the re-opening of Ima Keithel, MAHUD minister O Henry did not give any specific date for re-opening of the three Ima Keithel in Imphal city.

He said that the decision for reopening of the three Ima Keithel will be taken after consulting with all stakeholders and after studying the ground situation due to the COVID-19 pandemic.